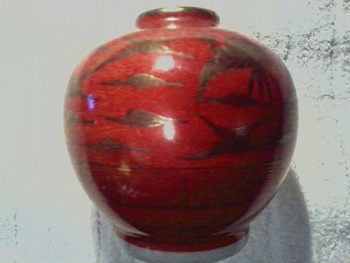 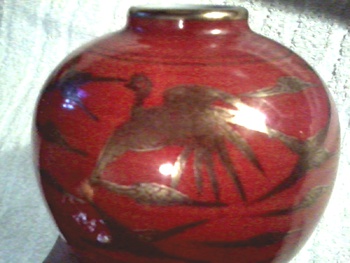 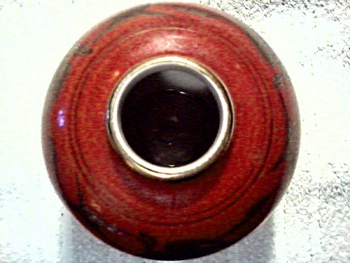 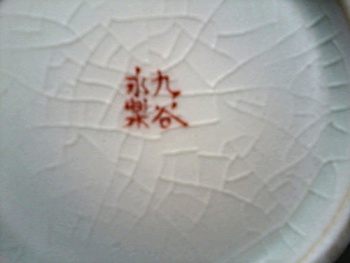 Here's a beautiful little 5" Japanese Kutani jar or vase done in a red ground (persimmon) with gilt cranes. This particular style is called "Eiraku". The mark according to Gotheborg's site says "Kutani" which are the first two characters on the right. It says 9 or "ku" and valleys. This is the area this particular pottery comes from. The two characters on the left "ei" and "raku"are for "Eiraku" which is the family lineage of potters . There are lot of Kutani marks and styles. This red ground and gilt vase is just one style. A very nice little piece from the late 19th to early 20th century -Mike-

The word Kutani means Nine Valleys and is the name of an area and a village. The two characters that make up the word Kutani consist of the character for "nine", ku and "valley". Since Kutani is a place, almost all pieces marked Kutani were decorated there even if by any of the many manufacturers or trading shops, rather than just a single factory. Porcelain decorators familiar with the Kutani style could also move around so as an example we can sometimes find pieces marked Yokohama & Kobe with decoration in typical Kutani style. Many Kutani made pieces might also have just the artist's as a mark, and no location at all, leading us to also needing to look at style as a clue to the origin of a piece.

Eiraku became well known when Eiraku Wazen, a 12th generation potter, came from Kyoto to manage the Miyamoto kiln, where Iidaya style originated. In this style subjects such as flowers, birds, beasts, or insects are painted in gold over a red base with a one stroke drawing technique. It is also referred to as Kinrande, Zengoro, or Kasugayama style, and is also painted and glazed in reversed colors.