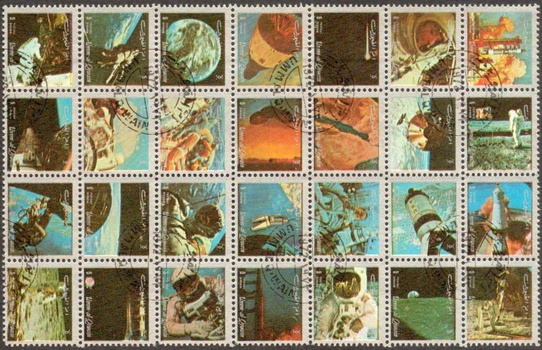 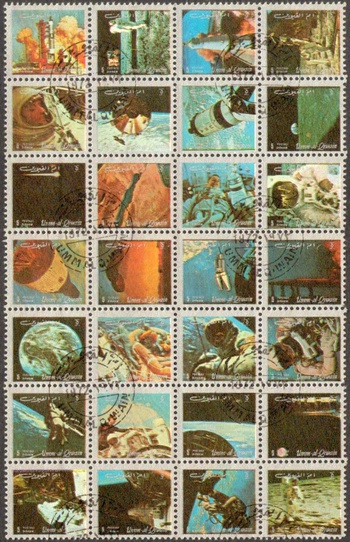 This is a first day issue postmarked mini-sheet of (28) "American Space Mission" commemorative Air Mail postage stamps issued in 1972 by Umm Al-Qiwain. - The sheet is shown here both vertical & horizontal as some images were printed sideways. There is no catalog# listing for this issue.
** Collector Issue - First Day Cancellations - original gum (unused)
--- Umm al-Quwain is the least populous of the seven sovereign emirates in the United Arab Emirates. They issued their own postage stamps from 1963 to 1972 when the UAE assumed full postal responsibilities. The United Arab Emirates or the UAE, is a country located in the southeast end of the Arabian Peninsula on the Persian Gulf, bordering Oman to the east and Saudi Arabia to the south, as well as sharing sea borders with Qatar, Iran and Pakistan. The UAE is a federation of seven emirates (equivalent to principalities). The constituent emirates are Abu Dhabi, Ajman, Dubai, Fujairah, Ras al-Khaimah, Sharjah, and Umm al-Quwain.