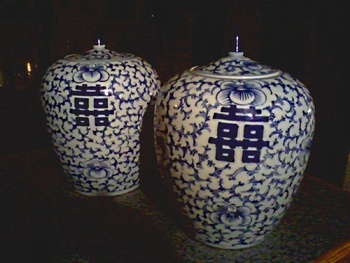 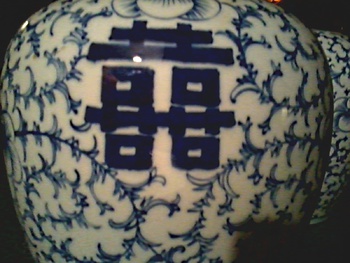 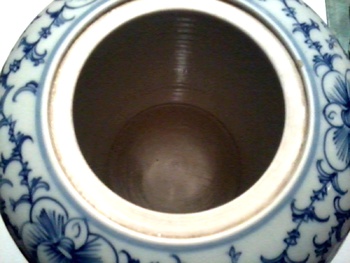 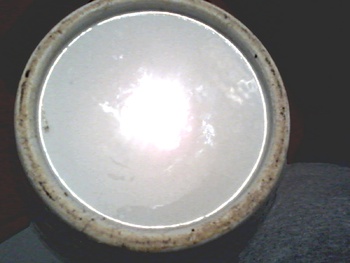 I was just about to call it a day and nothing to show for it. The last stop was out local GW. Nothing on the shelves just the same old junky junk. Hmm.... a big canvas bin/cart sitting by the back room doors. There were a couple people looking through it so I had to wait. They all walked away empty handed. I looked inside and saw several pieces of blue and white inside. Checked the bottoms and discarded the few "made in China " pieces and then saw these impressive large jars. One on top and the other buried in the bottom by other things. I looked at the bottoms nothing ,which is better for this kind of stuff actually. Wow...a pair of "Double Happiness" ginger jars !! Symbols for love and success. They are 11"H X 8"W. You can see the spiral throw marks inside on the sides and bottom. The lids are flat on the bottom and unglazed. Now there is a bit of doubt/hope as to their age but I'm pretty sure they are just decorative and fairly recent. Double Happy !! -Mike-

The Legend of The Double Happiness Symbol
by Mohan Deepin
www.fengshuimiracle.com

In the ancient Tang Dynasty (618 to 907 AD), a young Chinese student was on his way to Chang'an, the capital to appear for the national final examination. The winner would be selected to become one of the ministers in the court. Unfortunately, he fell ill as he was passing Liukeng village on the slopes of Donghua Mountain. A herbalist doctor and his beautiful daughter looked after him. He fell in love with the girl and proposed to her.
The girl recited an incomplete verse:
"Green trees against the sky in the spring rain while the sky set off the spring trees in the obscuration..."
She would marry him if he found the other, matching line.
“I am sure I can find the other half but you will have to wait till I finish my examination.” He said. The girl agreed.
The young man won first place in the examination and the emperor looked on him with great favor.. Now the winners had to answer the final question. The King recited:
"Red flowers dot the land in the breeze's chase while the land colored up in red after the kiss."
The young man immediately noticed that the lines written by the girl he loved was the first part of the couplet. And perfectly fit the emperor's couplet. He took his love's part and answered without hesitation.
The King was pleased to see the harmony of the couplet and selected the young man as his minister. “But sire, I need a week to complete an unfinished task before I start work.”
On leave, he met with his beloved and recited the King’s lines. The girl was ecstatic to find her dream man and they were married immediately. During the wedding, the couple "doubled" the Chinese character for "happy" on a piece of red paper and put it on the wall of their home to express their happiness at the events that had brought them together . And so began the lucky symbol for love and success.