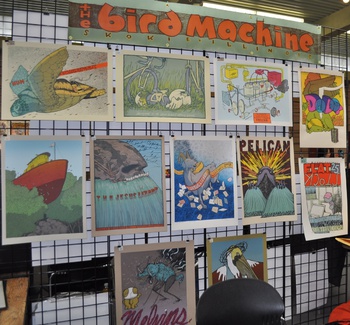 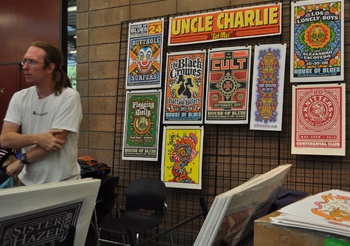 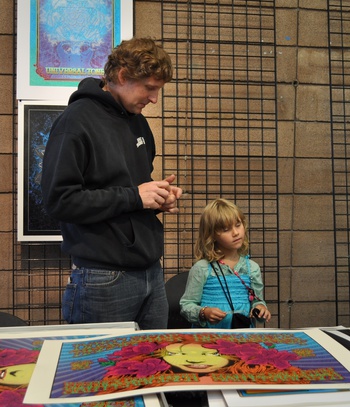 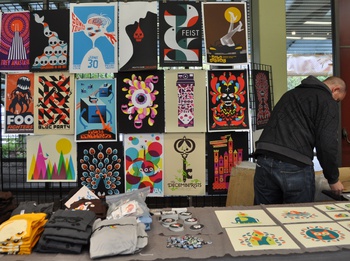 This weekend I've posted a few Show & Tells from Flatstock 25 - By the Bay, which took place on July 10, 2010 in San Francisco. There are lots of other photos on my hard drive of Chuck Sperry, John van Hamersveld, Mark Twain Behrens, Marq Spusta, Dennis Loren, Gary Houston, Mig Kokinda, and many more. Here are four more shots.

On the left is Jay Ryan's stuff. H e does business as The Bird Machine. I've always liked his light, friendly, humorous touch. I bought the poster he created for this show, which you can see in the bottom-right corner of the image. Ten bucks, what a deal!

Center left is Charlie Hardwick, AKA Uncle Charlie, from Texas. He gave me a sticker of his Mr. Flowers image, which he also used to create a poster for Gomez (I've seen them a bunch of times). He didn't have a Gomez poster with him so I need to follow up on that. Charlie was there with his family, including his two adorable daughters. At the end of the show, they were waiting for almost an hour for a cab to take them to their hotel near Fisherman's Wharf. The girls were being good sports about it, but I couldn't stand the thought of them waiting by the curb with the fog starting to roll in, so I got my Jetta and offered them a lift. We had just finished taping my trunk shut (the boxes filled with his art did not quite fit) and were about to figure out who was going to sit on laps when the cab, a nice roomy van, showed up. So I almost got to do a good deed for this very nice family and a terrific artist.

Center right is Dave Hunter, who also had his daughter with him. Hunter is doing some beautiful work right now, including the poster in the foreground for Dark Star Orchestra. I have a couple of his posters that he created for Moonalice, but one of these days I need to get a Hunter silkscreen. The guy is just too good.

Finally, the photo on the right shows Dan Stiles setting up his area. Stiles is not my usual aesthetic. His stuff is very clean and spare, but it's so smart. Just look at that top row, with that hilariously edgy image for Sonic Youth, the almost theatrical poster for Death Cab for Cutie (it reminds me of posters for shows like "Wicked"), and the puzzle-like creation for Feist. Here's hoping there will be a next time. ;-)