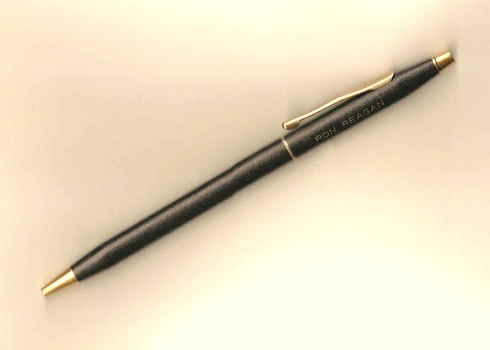 This is a vintage 1970's Cross Ballpoint Pen handed to me personally by Ronald Reagan in 1976. - It is the Classic Century model 2502 with a satin black casing with gold-plated embellishments. His name "Ron Reagan" is engraved on the side in gold print. ** On Saturday May 1st, 1976, Ronald Reagan & Jimmy Stewart were making campaign stops in Michigan City, Indiana prior to his Indiana Republican Presidential Candidate Primary Contest with Gerald Ford. - Reagan and Stewart had Sunday brunch at the Tinker's Dam Restaurant in Long Beach where I was working as a dishwasher at the time. This pen came back to the kitchen on a tray of dishes and I returned it to the waitress who had brought the tray back thinking it was hers. Soon after, Ronald Reagan made his way back to the kitchen area and gave me the pen, maybe thinking he was going to acquire a new voter, only to find that I was not yet old enough to vote (I was 10 days shy of age 14). I recall him laughing and telling me the pen was out of ink, but maybe I would get a refill and remember to vote for him in the future when I was old enough. - This has become one of my most cherished collectibles. I never bought a refill and it still has the original C4 Black Medium ink cartridge marked Fisher Pen Co., Forest Park, Illinois.