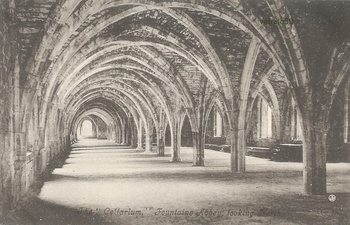 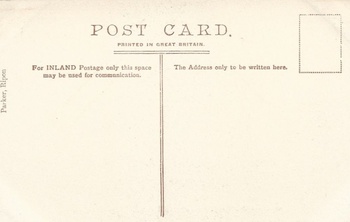 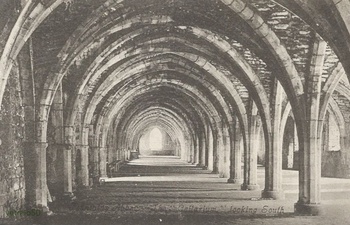 Today's cards are two from the collection of Septimus and Clara Miller. All in all there are 10 postcards that show scenes of Fountains Abbey collected by them on their world tour of 1906. The cards are part of a series by Parker of Ripon. Is it C or G. Parker?

Fountains Abbey is a Cistercian Monastery dating back to 1132.

Amazingly the cellarium roof has remained intact and the lay brothers ate, slept and socialised here, beneath the incredible vaulted ceiling which escaped Henry VIII’s brutal sixteenth century dissolution of the abbeys. Today the inhabitants are protected species of bat who live in the ceiling nooks and only come out after dusk. It is estimated there are over eight species of bats living in the cellarium.

The Cellarium is about 300 feet in length and 40 feet in width. It is believed to have been constructed in two phases. The northern portion, extending from the nave of the church to the porter's lodge was likely constructed during the twelfth century and is Norman in design. The Cellarium is designed such that there are two aisles divided by a row of columns formed from the ribs of the stone vaulting. The vaults belong to a simple quadripartite system.

I am beginning to get a feel for Septimus and Clara's fascination with architecture. Their home was created in the 1890's and had an Italianate feel. But in 1902 their 13 year old daughter died tragically. They built a mausoleum for her in the Gothic taste with vaulted ceilings at Brighton General Cemetery. These days it has fallen into disrepair but is of such significance that the Southern Metropolitan Cemeteries Trust is seeking to raise $100,000 to restore the historic monument.

The trust received a $10,000 Australian Federal Government grant to fund restoration of the 111-year-old Septimus Miller Mausoleum, which was built by the 'racing identity' for his daughter who died aged 13.

Restorative consultants submitted a report to the trust in December indicating the mausoleum had deteriorated significantly and that $80,000 to $100,000 would be needed to stabilise the building.

No wonder the Miller's focussed on Gothic architecture on their world tour in France and in England. The scene of the Cellarium must have been haunting for them. I find it extraordinary.