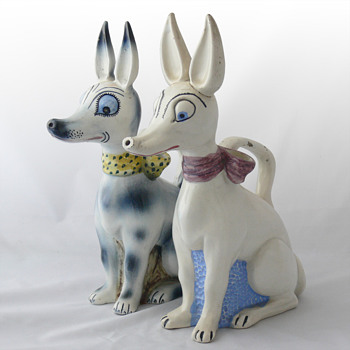 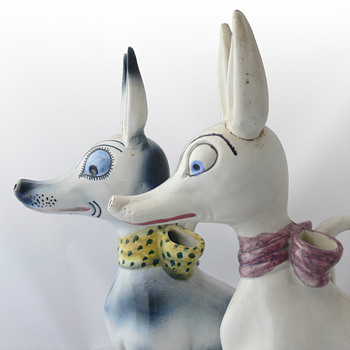 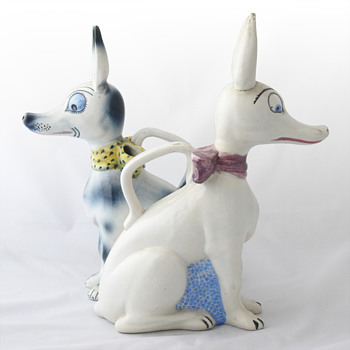 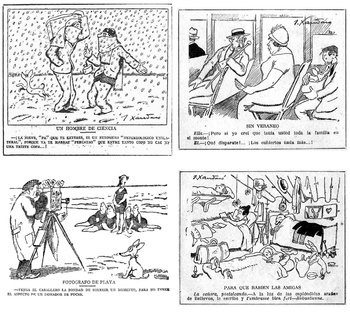 This two "botijos" in the shape of dogs were typical in the 1930s Valencia. As I told you when talking about the metal box, Valencia is kind of Spain's traditional source of decorative arts... and apparently it was great during the Art Deco years.

First of all, I'll have to explain what a botijo is, with a little help from wikipedia: "the botijo is a traditional Spanish porous clay container designed to contain water. The botijo has the property that once filled and placed in the sun, it cools the water that it contains, acting as an evaporative cooler. It usually has one mouth where it is filled and one output called "pitorro" to drink from. The botijo is a typical element of Spanish culture and may vary in shape, color and material". On pic 4 you can see a traditional one, but, as the text explains, it may have a lot of shapes, colours and finishings (don't agree with what they say about the "different materials"... it won't work if it's not made of clay)

In this case the mouth is in the dog's ribbon (look at them on pic.3) and the spout is on the dog's nose.

They stand a little over 30 cm... more or less the size of a Whippet or an Italian greyhound (a piccolino).

By the way, I forgot something really important: the dog's design comes from Joaquín Xaudaró, one of the best Spanish cartoonists and illustrators in the 1920s and 1930s, and it was a popular character, so this could be the Spanish equivalent of a mickey mouse jug... :)