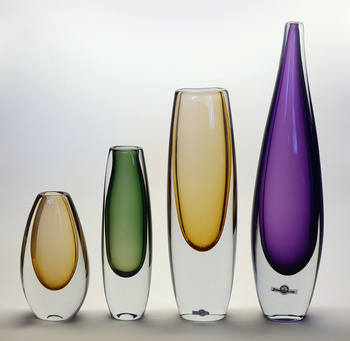 Back with a post after a little break. Four Strömbergshyttan models from late 1950s, including one that I had not previously seen. Not sure which model number it has.

Possibly B929? - 33,5 cm with x70 ametist underlay. Only signed "Strömbergshyttan" without model number. Design: Most likely Gunnar Nylund. This can also be a model outside the ordinary range, because it only is signed with the factory name. The seller had received the vase at the auction after Asta Strömberg's estate.