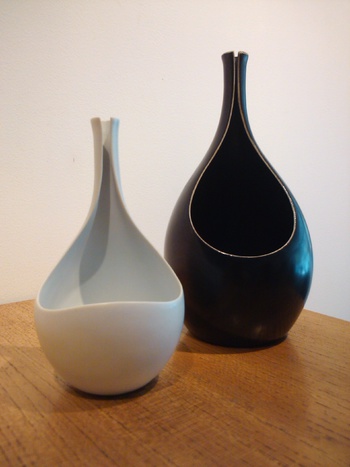 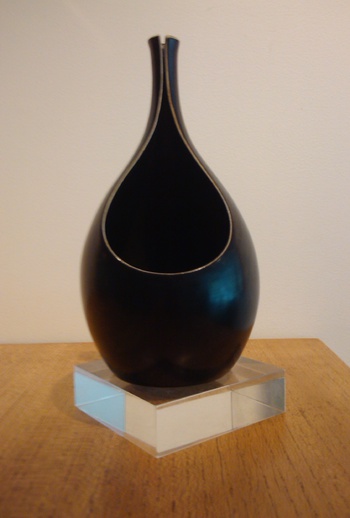 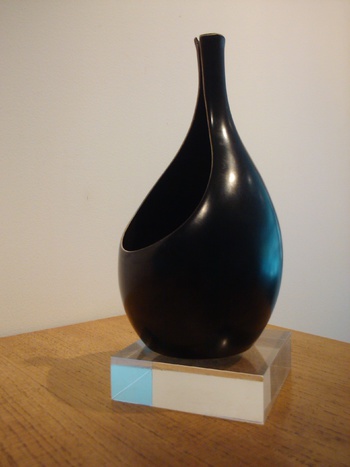 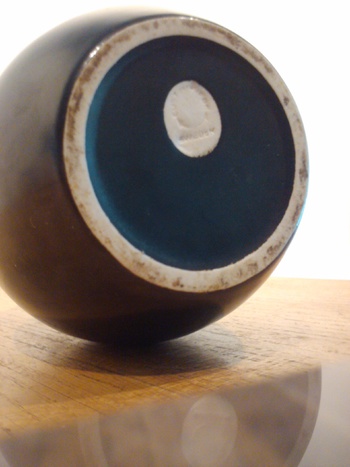 A break from the PC's to return to another of my favourite design pieces.

Three years ago now I posted my small matte white Gustavsberg 'Pungo' vase on CW. It was designed by Stig Lindberg in 1953. It was bought in Bondi Junction about five years ago and remains a favourite object. The marks at the bottom are: 'GUSTAVSBERG', an anchor and 'SWEDEN' impressed. When I bought the vase there was also a part gold sticker which had the same info plus the studio "hand" and Carrara/Stig Lindberg.

Last Tuesday I was in an op shop and looked carefully around the shelves and I found a nice WMF dish and thought I had had my fill for the week. I went to the front of the shop for another check of the shelves and I found this on a shelf I had checked just minutes before. It can't be? It was! I had finally found the harlequin pair to the smaller white vase.

How do they do it?

It was actually a very dark brown rather than the black I had expected from the photos on the net.

Slightly different in shape to the smaller version.
It is marked with the circular impressed Gustavsberg Anchor Sweden mark.
Height: 19.5 cm. or 7.7"

There is an even larger one too!
How long will it take to to find it?

1962 Gold Medal at the First International Ceramics Festival in Prague.

One of Sweden's most important postwar designers, Lindberg created whimsical studio ceramics and graceful tableware lines during a long career with the Gustavsberg pottery factory. Stig Lindberg studied painting at the University College of Arts, Crafts and Design. In 1937, he went to work at Gustavsberg under Wilhelm Kåge. In 1949, he was named Kåge's successor as art director. From this period until he left Gustavsberg in 1980, he designed individual ceramic items, as well as factory produced ranges and lines of dinnerware. He achieved fame for his eccentric forms and whimsical decoration. In 1982, he died due to a myocardial infarction. (Wikipedia)