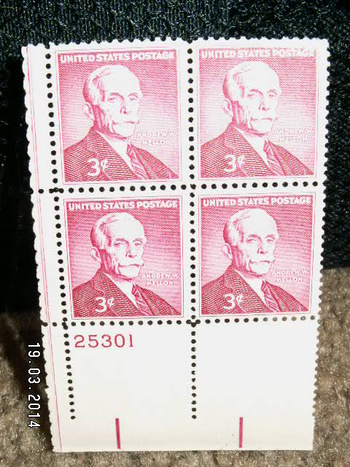 A 3-cent stamp commemorating the centennial of the birth of Andrew W. Mellon (1855-1937) was issued in Washington, DC, on December 20, 1955. Designed by Victor S. McCloskey, Jr., the stamp honors Andrew W. Mellon, financier and art collector, who also served as US secretary of the treasury from 1912 to 1932. During his service as secretary of the treasury, Mellon played a prominent part in tax reformation in the 1920s. In 1937, Mellon donated $15,000,000 to build the National Gallery of Art, along with a valuable art collection which included Raphael's "Alba Madonna." The National Gallery of Art opened in 1941 in Washington, DC. The stamp's central and dominating design was reproduced from a print of the portrait of Andrew W. Mellon by Oswald Birley. The lettering "United States Postage" appears across the top of the stamp. Arranged in two lines just below the right center of the portrait is the lettering "Andrew W. Mellon," and the denomination "3¢" is placed in the lower left corner of the stamp. All lettering is in whiteface Gothic. The stamp is 0.85 by 0.98 inch in dimension, arranged vertically with a double outline frame, printed by the rotary process, electric-eye perforated, and issued in sheets of seventy. The color of the stamp is maroon. The printing of 119,000,000 stamps was authorized.