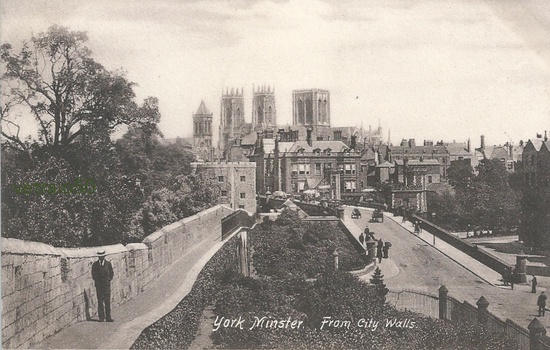 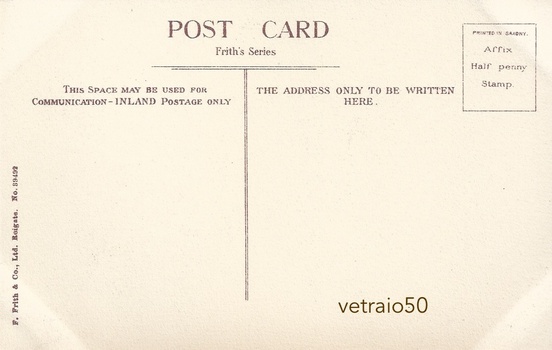 The postcards collected by Septimus and Clara Miller included 21 on the topic of York. It is a walled city, situated at the confluence of the Rivers Ouse and Foss in North Yorkshire, England. The city was founded by the Romans under the name of Eboracum in 71 AD.

Before New York there was York.
The Millers did both cities on this trip in 1906!

The word York (from Danish Jorvik 9th century AD) derives from the Latinised name for the city, variously rendered as Eboracum, Eburacum or Eburaci.

In the 19th century, York became a hub of the railway network and a confectionery manufacturing centre. It seems that this card includes some of the Roman walls to the left and in the foreground you can see a grassed area. This was the site of the original railway station in York. For this reason this strict of the the walls is called these days "The Station Road Walls".

York is 188.5 miles (303 km) north of London, the main line connecting the capital of England with Edinburgh, the capital of Scotland. Originally it was part of the North Eastern Railway.

The first York railway station was a temporary wooden building on Queen Street outside the walls of the city, opened in 1839 by the York and North Midland Railway. It was succeeded in 1841, inside the walls, by what is now York old railway station. In due course, the irksome requirement that through trains between London and Newcastle needed to reverse out of the old York station to continue their journey necessitated the construction of a new through station outside the walls. This was the present station, designed by the North Eastern Railway architects Thomas Prosser and William Peachey, which opened in 1877. It had 13 platforms and was at that time the largest station in the world. As part of the new station project, the Royal Station Hotel (now The Royal York Hotel), designed by Peachey, opened in 1878.

Lots to see and do in York!

Check out the number of motor vehicles heading into the city!

Francis Frith is an interesting character in his own right!