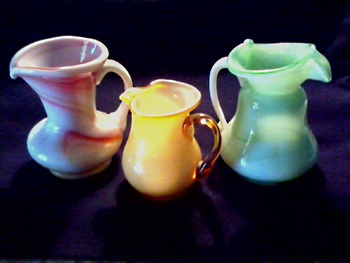 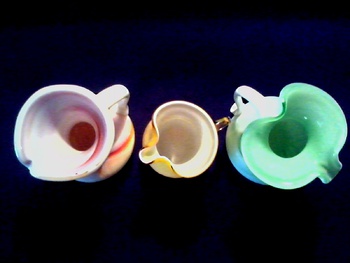 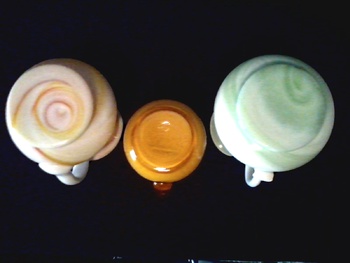 Picked these up at Salvation Army this morning. I found them one at a time as they arrange their glassware by color from yellow to white. The two 4" ones are a similar heavy marbled milk glass. The smaller 3" one is clear amber glass cased inside with white and appears to be hand blown. They are not marked or labeled. Just thought they were rather nice. -Mike-

Note: Here's a little more research so it's a toss up between these two.

The Kanawha Glass Company began in 1955 in Dunbar, West Virginia. Named after the Kanawha River, its focus was to manufacture quality art glass vases and pitchers in milk glass, colored glass, and crackle glass. It also developed novelty lines for gifts.
Kanawha is one of the most successful West Virginia art glass companies, along with Blenko, Rainbow, and Pilgrim Glass. Kanawha and the Hamon Glass Company of Scott Depot, West Virginia co-operated briefly in 1966 although each company remained separate in name and operation. Kanawha continued production until July, 1987, when it was purchased by the Raymond Dereume Glass Company of Punxsutawney, Pennsylvania, who continued to sell the remaining Kanawha glass and gift items. The machinery and equipment were moved to Punxsutawney. Mr. Dereume decided to drop the Kanawha line in 1989 after realizing having the Dereume glass line and the Kanawha line were more than his staff could handle.

Akro Agate Westite Glass Companies
Courtesy of www.pghdepressionglass.org
The Akro Agate and Westite Glass Companies both made marbleized glass pieces and are inextricably joined because many unmarked pieces found today were made from molds that started with the Westite Company. The molds were sold to Akro Agate after a fire destroyed the Westite Plant and it went out of business. Many of the unmarked pieces could easily have been made by either of these two companies.