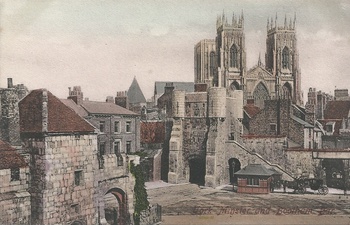 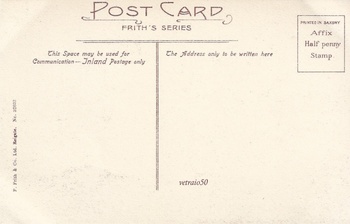 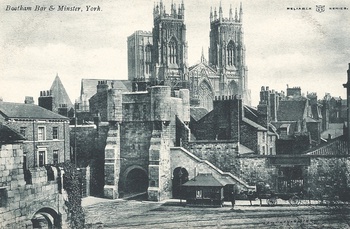 The Millers visited the city of York in 1906 as part of their grand tour of the world's racecourses. York racecourse is the third largest in England. York is also a city with a long history dating back almost 2000 years. Part of that history is the Bootham Bar. The word 'Bar' is quite particular: it seems a 'Bar' is a gate. Bootham Bar is one of the four gates to the walled city of York.

The Millers had two identical cards of this view of the gate and the Minster. Perhaps one was collected by Septimus and the other by his wife Clara? The view is well known and was painted by Myles Birket Foster in 1867. That painting is housed these days in the York Art Gallery situated at this exact same spot . This is the view you would have today if you were looking at the Minster from the steps of the Gallery. There's even a cart in the earlier watercolour by Birket Foster!

Bootham Bar is not Roman but it has been around for quite a while: the archway itself dates from the 11th century and the rest of the structure is largely from the 14th century.

The Scots had been a problem to York for centuries.

The Scots headed down soon after Bannockburn. In 1319 an army of 15,000 Scotsmen advanced and the city of York would probably have fallen had it not been for its strong defensive walls, the finest examples of military architecture in England. As it was, they found York too well cared for, and so, destroying everything outside the walls, they advanced south by Ferrybridge.

The residents of Bootham would have fared badly that day!

Bootham is just outside Bootham Bar. Its name is said to derive from an ancient description as 'the place of the booths', referring to the poor huts located just outside the city walls.

The bar was damaged during the siege of York in 1644. Like Micklegate Bar, it was sometimes used to display the heads of traitors, the heads of three rebels opposing Charles II’s restoration were placed here in 1663.

Bootham Bar was the last of the gates to lose its barbican, demolished in 1835.

The first of these images is a tinted card published by Francis Frith and Co. of Reigate numbered 32032 ie 1893. Printed in Saxony! The second is a Reliable series black and white card published by William Ritchie & Sons, Ltd. (WR&S) 1902-1928 London, England and Edinburg, Scotland.

I just love these Frith cards! I like the man's style. A very good eye!