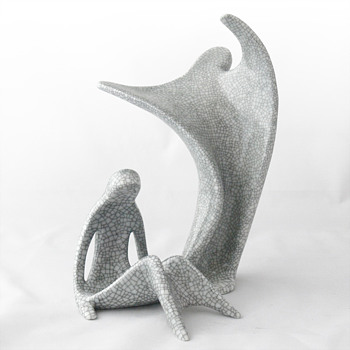 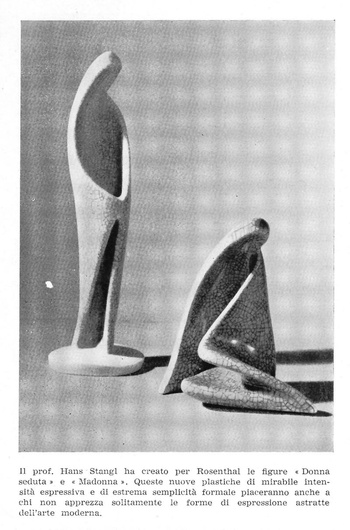 These figurines are just two of several Carlos has got for ages. They were designed by Hans Stangl between 1953 and 1956. I have seen at least seven different models (and some day Carlos will show the the others he's got, so I'll know how much are missing in our collection ;) )h. I'm not sure Stangl was one of the first ones in using this crackeled finishing in mid-century porcelains, but it suits them so well I think these figurines wouldn't be of any importance if they had a glossy white uniform surface (by the way, I've seen a pic of a matte black one online... it doesn't look this interesting, really)

Pics 2 and 3 show each figurine as seen from different angles... I think that's vital to understand them, as Stangle stylized them in such a way that they look great in almost every position.

On the last pic you can see an scanned ad from a 1955 copy of the famous Italian magazine Domus we've got at home (Mmmm... those magazines will make an interesting post ;) )

And now, a confession: when I first ever shaw them asked Carlos: when did Rosenthal started making such awful stuff? Now I can't claim I love them, but I think they're not that awful after all :) 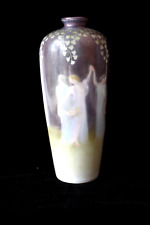