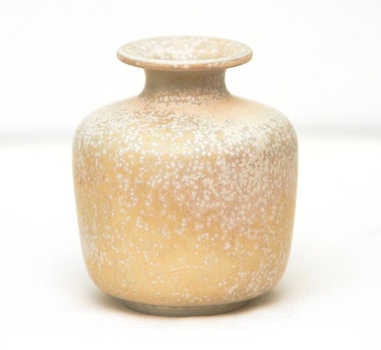 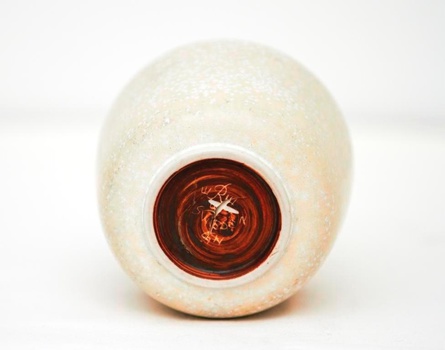 I am not really a ‘mid-century person’, but at times you come across things that are too good to pass up, although they are not within your normal sphere of interest… I sometimes buy these things, thinking that I can always use them as gifts, but invariably I end up not wanting to part with them!

This is also the case with this 1950’s Rörstrand stoneware vase, which I bought on a flea market for DKK 100 ($ 18). The vase was designed by one of the most prominent Swedish potters, Gunnar Nylund (1904-1996), who also played an important role in Danish ceramics history (his mother was Danish; his father Finnish). He was a well-known ceramist as well as a sculptor, architect, and glass artist. He worked at Bing & Groendahl 1926-1928 and more importantly, he founded the influential Saxbo Pottery with civil engineer Natalie Krebs in 1929, using the workshop previously owned by Patrick Nordström. Joining Rörstrand in 1931, he became the artistic director and stayed until the late 1950’s. At Rörstrand he was very prolific and produced decorative items as well as items for daily use. He returned to Denmark in 1959 and worked at Nymoelle Keramiske Fabrik. After a few years he left and worked freelance for Strömbergshyttan and Rörstrand. His works are represented in many museums all over the world.

The glaze used on this vase very similar to what was called 'Gundestrup glaze' at Royal Copenhagen (named after an ancient settlement in Denmark because it glaze was used on items inspired by pottery found at this settlement). The glaze is made with the help of the mineral rutile which creates the lovely mottled effect which makes this vase look like an eggshell!

Height: 10.5 cm. Mark: 'R' for Rörstrand, surrounded by four crowns, and below it: Sweden. 'Sweden' was added to the Rörstrand mark in 1951. Moreover, the initials 'GN' for Gunnar Nylund. There's a crack at the bottom; I am not sure whether it was made on purpose or whether it is the result of some accident...

Vintage Arabia of Finland anemone b...
$57