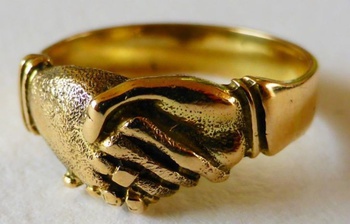 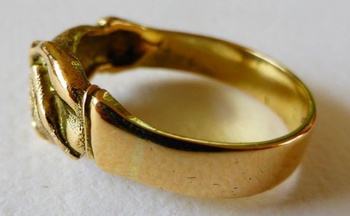 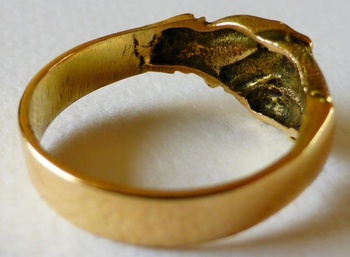 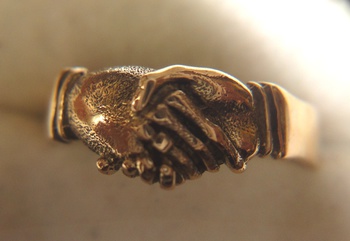 The fede ring traditionally has the motif of two right hands, one female and the other male, clasped together or often holding a heart between them. The word ‘fede’ comes from the Italian 'mani in fede' which means 'hands in faith'. The fede ring dates back through antiquity and was popular during the Renaissance when it was given as a symbol of betrothal. It was popular throughout all the Middle Ages across all of Europe as a symbol of love and has continued to be worn in different forms to this day. Fede rings would very often be inscribed, usually in Latin or the local language. Their popularity ceased by the end of the 19th century.

I'm glad to show you this Gold not marked but tested at 18 ct.(K) Fede Handshake Friendship Ring. In very good used condition.
It is special that is worn on the one hand a signet ring.
Weighs approximately 3/3.5 grams. USA Size 7 1/2.
Solid and very wearable! A rare find!

I have no idea what time this ring dating, perhaps you could give me some suggestions.