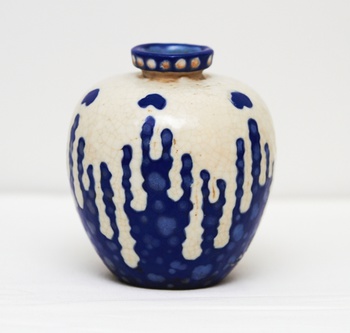 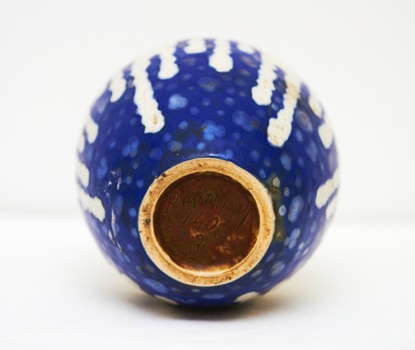 This blue and white vase (height 14 cm) is one of my favorites (and one of the few I’ve bought on an auction and not a market of some sort). It is also one of three Revernay vases I am happy to own! It was made at the Revernay Pottery in Digoin in France. The pottery was founded in the late 19th century by the ceramics factory Utzschneider & Co., which was established in Sarreguemines in Alsace in 1790. Among Utzschneider’s early customers was Napoleon I.! When the area became German in the 1870’s, it was decided to establish a French subsidiary by the name of Revernay. The earliest vases from the Revernay Pottery carry the year 1896 (the later ones are not dated). The Pottery closed in the 1930’s and re-opened 1950-1960, producing a totally different type of pottery in ‘Picasso style’ and it is assumed that 1896 was also the year the Pottery was established. Frustratingly, very little is known about the Pottery. The first time it is mentioned is in a report by the jury of the World’s Fair in 1900 – the Pottery was represented there with a number of vases. No names of artists are known, although the style is very distinct so some thought was clearly behind it! The Pottery was the subject of an exhibition at the Musée de Faïencerie de Sarreguemines in 2004.

The earliest vases are clearly Art Nouveau in style (decorated with lilies or other floral motifs), but this was soon changed to a more stylized art deco-inspired style. The decoration on this vase is actually very typical (and very recognizable) with its marble-effect glaze, made to look like drip glaze (although it isn’t). When you look at the vases produced at the Revernay 1896-1930, no particular stylistic evolution is detectable, so it is it difficult to date the vases stylistically. However, it is thought that the décor numbers were used sequentially, and if that is the case, this vase (with the décor number 3) is among the earliest ones.

All the Revernay vases carry the name ‘Revernay’, the earliest ones painted, all the other ones incised; a few are also decorated with a bronze overlay. Moreover, many carry two numbers of which the first is the shape number (here 140) and the second the décor number. In a few cases, the décor was used on different shapes – that is the case with this one, 3, which is blue and white. Other décors seem to be reserved for only one shape.