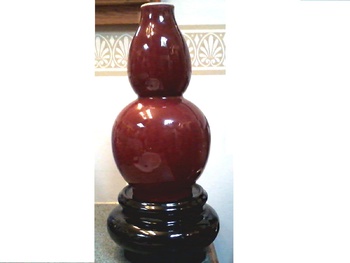 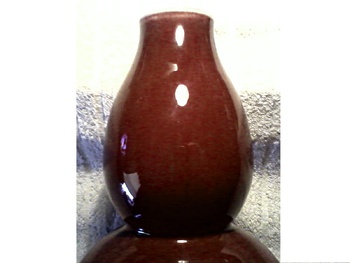 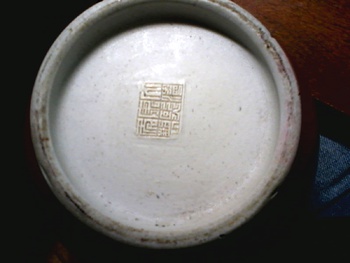 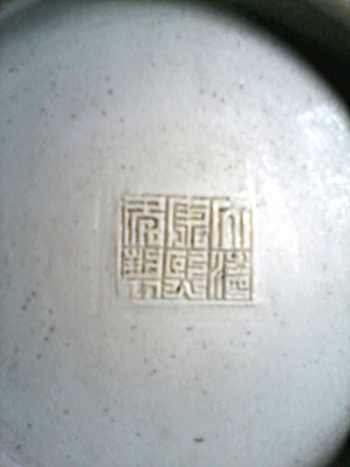 Here's the best thing I found today or at least my favorite thing. A wonderful 12" iron red (orange red) double gourd vase from Goodwill . I love the shape and color plus I don't have one of these in my collection. Didn't do too much research on it. I think the impressed mark is interesting but probably not authentic. I'll check around on Gotheborg's site for this piece along with the teapot. It's in perfect condition. I didn't notice any craquelure in the glaze so I don't think it's that old, but I could be wrong. -Mike-

I received a reply from Peter on the "Collecting Antique Chinese Porcelain " forum:

"The vase itself could be late Qing dynasty. Whether the bottom is glazed or not does not matter, in my view, but the mark is a problem in both cases. (the liveauction example in my post)
The Kangxi mark is apocryphal on both items. There were no Zhuanshu marks used in the Kangxi reign. See http://www.chinese-antique-porcelain.com/antique-pottery-marks.html
All Kangxi marks in Zhuanshu style are likely from the late Qing dynasty (or later), but I have actually never seen monochrome items from the late Qing dynasty with such Kangxi marks. Most of these remained unmarked. A hands-on inspection might be appropriate in this case."