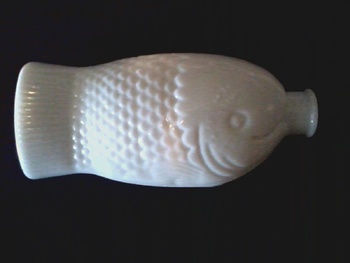 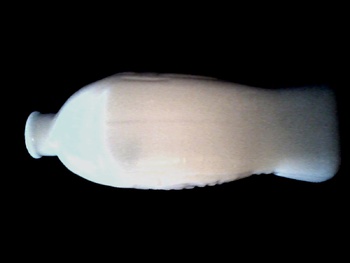 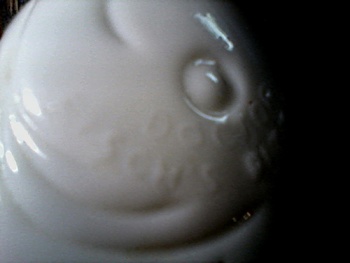 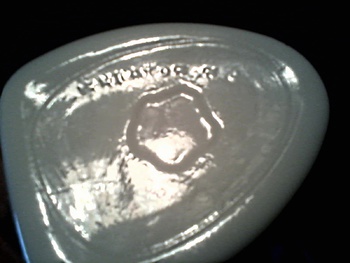 I didn't think much of this when I bought it, just thought it was fun. It's a little 7 1/2" milk glass bottle shaped like a fish. I could barely see the name on the bottom. It says Wheaton NJ with an embossed star. I have a couple of amber bottles from them as well. So I was familiar with the company. There is also writing around the eyes that's almost invisible. It says "Doctor Fisch's Bitters" under the eye on one side, and the other side says Millville New Jersey. Not sure of the date or if it's old or a reproduction. -Mike-

Wheaton Glassworks, Millville
Theodore Corson Wheaton, the founder of the T.C. Wheaton Company, was born in Tuckahoe, New Jersey, in 1852. He received his MD degree in 1879 and three years later moved to Millville, New Jersey. Wheaton had become interested in pharmacists, and physicians, glassware, and as a result, he bought out Fred Van Staden's share in the already existing Shull-Goodwin Glass Company in Millville. By 1890, Wheaton had bought out his remaining partners and renamed the company the T.C. Wheaton Company.
The T.C. Wheaton Company was nationally recognized for producing drug and screw-cap tablet vials. The grinding department, specializing in ground stoppers and bottles, also expanded to the point that Wheaton became the largest supplier of ground glass stoppers in the United States. The plant also manufactured nursing bottles and breast pump glasses. By the 1930's, the T.C. Wheaton Company was making perfume and cosmetic containers for Elizabeth Arden and Shulton.
When T.C. Wheaton died in 1931, his son Frank H. Wheaton, Sr., was elected president of the company and chairman of the board of directors. Wheaton, Sr. began expanding and modernizing the plant. When Wheaton, Sr. died in 1983, his son, Frank H. Wheaton, Jr., oversaw the glass plant and established a new enterprise called the Wheaton Glass Company. This company specialized in manufacturing perfume and cosmetic containers, glass tubing, and even began to experiment with producing plastics. In 1966, the T.C. Wheaton Company merged with the Wheaton Glass Company. Two years later, Wheaton, Jr., founded Wheaton Village, an organization that is devoted to celebrating and sharing the creative spirit of American glass and other craft. Wheaton, Jr. wanted to create a venue that would educate the public about the art and history of American glass making.
For three generations, the Wheaton family owned and successfully operated the Wheaton Glass Company in Millville. In 1971, the T.C. Wheaton Company and Wheaton Glass Company became incorporated under the name of Wheaton Industries. Wheaton Industries was sold in 1996 to a division of Alusiusse Lonza Holding, Ltd. of Switzerland, a company that manufactures pharmaceutical packaging.The firm was later renamed Wheaton USA, Inc. in 2000.