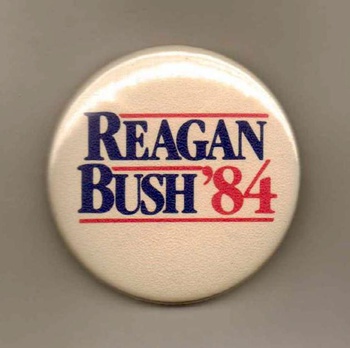 - "Reagan-Bush '84" political election pinback button - Diameter 1 3/4"
- Red and blue on white color background - maker unknown
- Campaign button for the second term of President Ronald Reagan and Vice-President George H.W. Bush - During his reelection bid, Reagan campaigned on the notion that it was "Morning in America", winning by a landslide in 1984 with the largest electoral college victory in history.