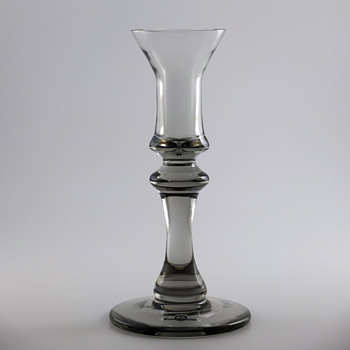 I think this candlestick is a part of the series "Allmoge", designed by Gunnar Cyrén after Orrefors took over Strömbergshyttan 1976-77. Here in smoke grey color. The old Strömbergshyttan sticker indicates production not later than 1977-78? After that I think the new sticker model was used. In the catalog dated 1/1 1977 there are no candlestick like this one, only Asta Strömbergs older designes. So I think this was introduced late 1977 or 1978.