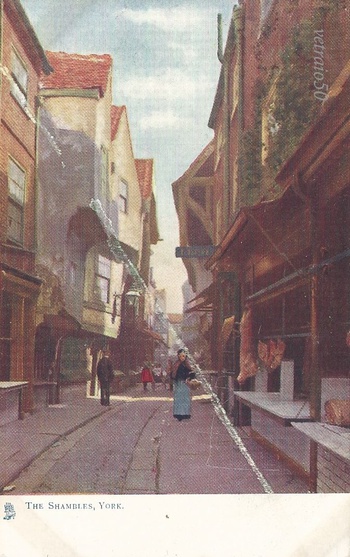 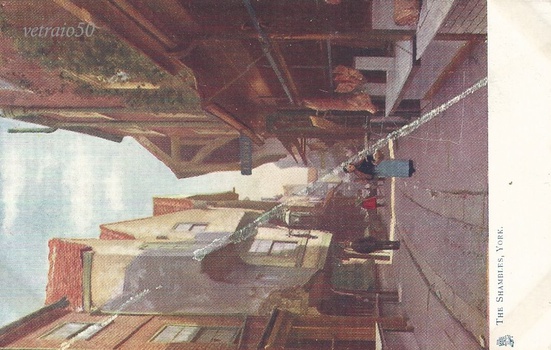 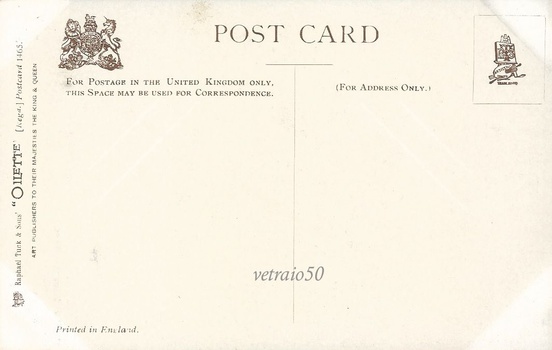 It's a Shambles – but it's the most picturesque street in Britain.

Sorry about the condition of the PC! It's a shambles too!

In 2010 the inaugural Google Street View award went to The Shambles as Britain's Most Picturesque Street.

Cobbled York thoroughfare with roofs so close they almost touch!

Helen Carter in the Guardian wrote that “Each year, York attracts more than 4m visitors spending more than £330m and tourism is vital to the city's economy with 10,000 jobs in the tourist sector. Many visitors take a trip to Shambles.”

The Millers went there too a century before the Google award in 1906 and bought this PC that has been unfortunately disfigured! But they kept it!

1. a state of total disorder. - "my career was in a shambles"
2. a butcher's slaughterhouse (archaic except in place names) - "the shambles where the animals were slaughtered"

“It has a name that belies its quaint medieval beauty – Shambles. But the winding York thoroughfare that attracts millions of tourists every year has been voted the most picturesque street in Britain.

The distinctive, narrow, cobbled street is lined with wooden-framed buildings, some 600 years old. They lean together in the middle with roofs that are so close they almost touch.

Shambles with its variety of shops and cafes has been voted the most picturesque street in the inaugural Google Street View awards after more than 11,000 cast their vote in February.

The name is no reflection on the physical state of the street – Shambles originates from a medieval word shamel (meaning bench.) Pavements on either side are raised to create a channel which butchers would wash their waste through. It is one of the most visited areas of the UK and has shops, restaurants and tourist attractions, including seven evening ghost walks and tours and was mentioned in the Domesday Book, making it Europe's most well-preserved medieval street.”

This is a RAPHAEL TUCK & SONS postcard from the OILETTE Series Number 1465.