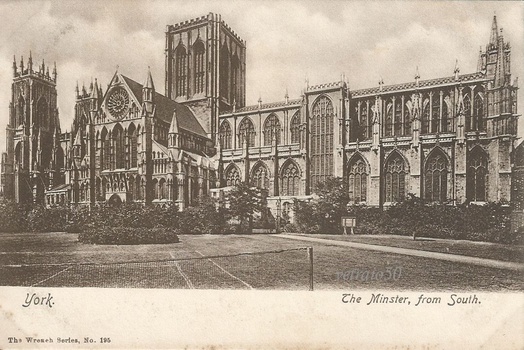 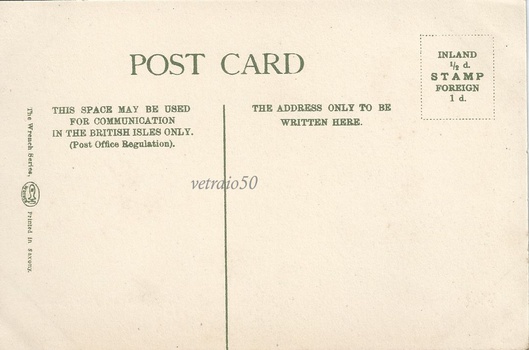 As I mentioned some time ago I researched the York Minster using a text called “THE CATHEDRAL CHURCH OF YORK, A DESCRIPTION OF ITS FABRIC AND A BRIEF HISTORY OF THE ARCHI-EPISCOPAL SEE by A. CLUTTON-BROCK . It is a book these days available in full on the net and it was published with “FORTY-ONE ILLUSTRATIONS” in 1899.

I was surprised to find that many of the cards collected by the Millers in York in 1906 reflected those found in this text. The Shambles card posted yesterday and this card today are two examples.

One surprising difference to the view seen here of the south face of the Minster with that in Clutton-Brock’s text is the tennis court in the foreground!

I would not be surprised if the Millers had a copy of that book as they toured the area. The book was published in a "specially designed cloth cover, crown 8vo, 1s. 6d. each." It was part of a series of books called the "Bell's Cathedral Series": "YORK. By A. Glutton-Brock, M.A. 41 Illustrations".

"Visitors to the cathedral cities of England must often have felt the need of some work dealing with the history and antiquities of the city itself, and the architecture and associations of the cathedral, more portable than the elaborate monographs which have been devoted to some of them, more scholarly and satisfying than the average local guide-book, and more copious than the section devoted to them in the general guide-book of the city, a need the Cathedral Series now being issued by Messrs George Bell & Sons, under the editorship of Mr Gleeson White and Mr E.F. Strange, seems well calculated to supply. The volumes are handy in size, moderate in price, well illustrated, and written in a scholarly spirit. The history of cathedral and city is intelligently set forth and accompanied by a descriptive survey of the building in all its detail. The illustrations are copious and well selected, and the series bids fair to become an indispensable companion to the cathedral tourist in England." — Times.

This is a sepia PC published by Evelyn Wrench "The Wrench Series. No. 195"

They also published "many views-cards in color, sepia, and a black & white series depicting resorts on a cream paper printed in Saxony.

Wrench became a Limited company in 1902 and in 1904 they changed there name to Wrench Postcards Ltd.

Because they refused to distribute any postcards but their own, supply eventually outgrew demand and they were out of business within two years. Wrench went on to have a career with the Daily Mail."
http://www.metropostcard.com/publishersw.html