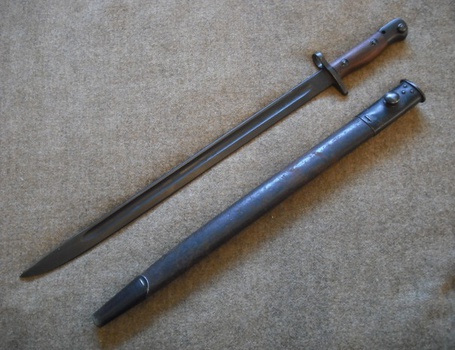 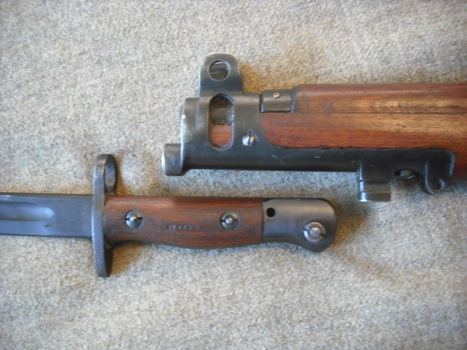 Here’s the bayonet I’ve displayed with my Australian SMLE.

This pattern bayonet began issue when the SMLE was introduced in 1907. Originally Pattern 1907 bayonets had a hooked quillion. Both the English and Australians stopped making them with quillions early on, and removed the quillions from most of the pre-existing bayonets, so now those are quite hard to come by. One of my goals it to get a quillioned Australian marked P07. One can always dream.

One thing I’ve noticed is that in the late 19th and early 20th century, whenever a country produced a shorter rifle, they tended to make a longer bayonet, I presume to make up for the shorter reach. Bayonet fighting was still considered a form of fencing, and the image of two soldiers both armed with bayonets, thrusting and parrying with each other was still on the minds of military planners. This blade is nearly 17” long. What appears to be a muzzle ring on the bayonet’s cross guard actually fits over a projection on the SMLE’s muzzle cap as seen in the photo above.

Like my SMLE, this bayonet was produced at Lithgow Armory, but much later, in 1944. During this time the woodworking shop at Lithgow was moved to Slatzenger in Sydney, thus the grips on this bayonet are stamped “SLAZ”. The leather and steel scabbard are also marked “MA” – the code for Lithgow Armory. This overall condition of this bayonet leads me to presume it was also refurbished after WWII.