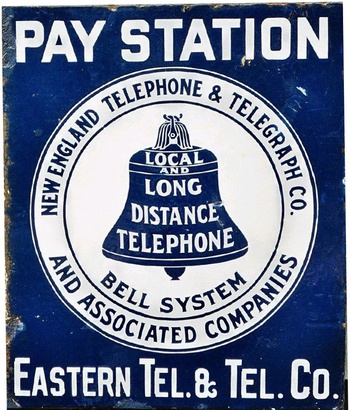 A distinctive 17"x20" porcelain double faced flanged sign provided by New Eng Tel & Tel at pay station locations in subsidiary company territory. Eastern Tel. & Tel. Co was located in Washington County, ME along the seacoast. Founded in 1911 it served ten towns and during 1918 took over operations of the Meddybemps Telephone Company followed by the Forest City Telephone Company in 1918. Eastern operated as a wholly owned subsidiary and was merged with New Eng. Tel & Tel in 1947. Eastern had exchanges in Calais and Eastport, ME. This sign was placed in service sometime during 1911.