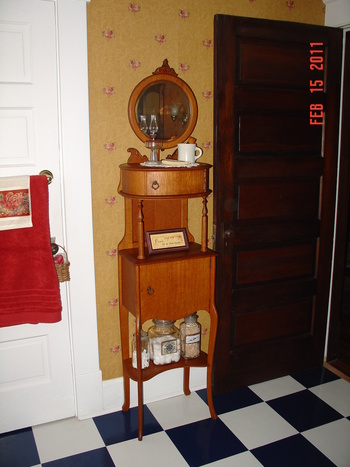 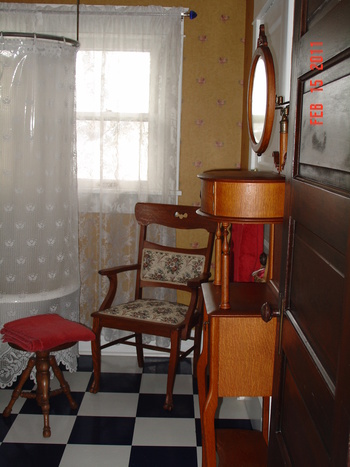 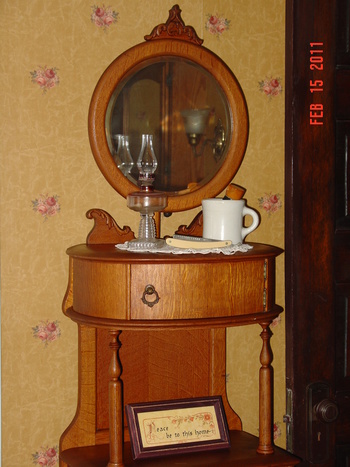 Governor of Indiana Warren Terry McCray's six-foot oak shaving stand. Patent January 15, 1904.
I love old things. I guess it all started about twenty years ago, I was going through a divorce and to get me out of the house and to get my mind off of the divorce I started going to garage sales with a friend I had meet through my brother and his wife.This was good therapy trying to keep my mind off of that and stay busy. My friend and I would go garage sailing on Saturdays and sell at flea markets on Sundays. Sometimes on Saturday we would fill his truck completely full with some great finds. Some things we would not sell and keep for ourselves. After setting up on Sundays and packing up I would always help him pack his things too. I swear we were always the last to leave and get out of there.See we both had our own enclosed trailers and after we were packed up and heading home, he would always invite me home with him because his wife would always have a great home cook meal waiting for us. Those were some of the best picking days I've ever had, after a long day in the sun then always was that great meal on Sunday evening,what a way to end a beautiful week. It wasn't to long after that that they moved away and I started going to auctions. I think there were auctions five nights a week back then, everyone had there hand in it and then on weekends there was a sale on Saturday mornings and some on Sundays. One day before they moved away we were going through Brownsburg, Indiana and right in town there was this big old beautiful house that the man was putting a for sale sign in the yard by owner. I fell in love with that house right then and knew I wanted it. I called the man and went there the next night with my friends and after looking I told him I would take it. I had all ready been pre approved and knew what I could afford and well the rest is history. I had the house in a little over a month and I have had so much fun landscaping and decorating the inside. The first thing I did outside was put canvas awnings on the front of the house to make it look like back in the days it was built, see the house was built in the twenties. I then had a wood gothic fence put up in the back yard and to finish the front I had a rod iron fence put up. After landscaping the front and the back it was starting come together. I love landscaping with all perennials because they come up year after year. Well back to the inside, It was hard finding the furniture I wanted at garage sales so that's why I went to auctions and estate sales because there was a better selection to chose from. One day I was looking at the ad in Lafayette, Indiana and they had a oak shaving stand that was going to be for sale. Not only was it just any shaving stand the ad said it was outstanding 6' oak shaving stand with bevel mirror and 2 doors (originally from Gov. McCray's estate in Brook, Indiana). After seeing the ad I knew it would look great in the bathroom upstairs. So I went there on that Saturday and they said I had my days confused and it was next Saturday that it would be for sale. So I went home and thought am I not suppose to have this, I've never messed up like that before. Well I got up early that next Saturday, it was 62 miles away from home and headed there again. It was a cold morning being in March. I got there and fell in love with it and thought I been here twice, I'm taking this home because that space in the bathroom would look great with that sitting there. Well it took hours before they brought it up so I went to the restroom and when I came out it was up on the block being auction off. I thought to myself am I suppose to even have this after what happen last week and now coming out of the restroom and it being on the block and almost missed it again. Well I got the winning bid and brought it home spending way more than I intended too, but I thought I've been there twice it's going home with me.After getting it home I looked up some information on Warren Terry McCray, 1865-1938. He was Governor between January10,1921-April 30,1924. Warren was born in Kentland Indiana a banker's son and was educated in public schools. He clerked in his father's bank from the time he was fifteen and took over as president when his father died in 1913. McCray's financial interest also included a chain of grain elevators and a stock farm on which he bred Hereford cattle. McCray was elected governor in 1920. His personal financial affairs suffered severe reversals during his governorship, and he was forced to resign in 1924 after being convicted of mail fraud in a case relating to his financial collapse. McCray served three years in federal prison, then returned to Kentland to rebuild his stock farm. He later received a full pardon from Herbert Hoover. Even though the Governor McCray doesn't have a good history, the shaving stand looks great in the upstairs bathroom. A correspondent by the name of Lynn Hopper of The Indianapolis Star did a article on me July 22, 1996. I was very honored by that as I am very honored again by you Collectors Weekly as you have ask me to write about something I own and cherish. I want to thank you again Michael Jones.