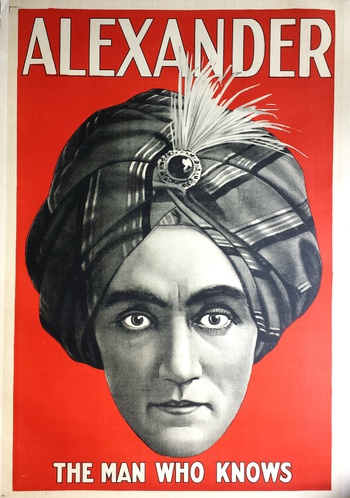 This is an original 1920 Alexander "The Man Who Knows" stone lithograph from my private collection of Magic posters. This is a 1-sheet sized poster and is the more common of the Alexander posters left in existence, but still a strong and powerful image.

Alexander was perhaps the most successful professional theatrical mind reader of his generation. He made millions of dollars performing on the grandest vaudeville stages - nearly $240,000. in 1924 alone and retired at age 47.

Alexander Conlin admitted to killing four men, was married seven times, occasionally to more than one woman at a time, spent time in jails and prisons around the U.S. and counted some of the greatest magicians of his time as his close friends.