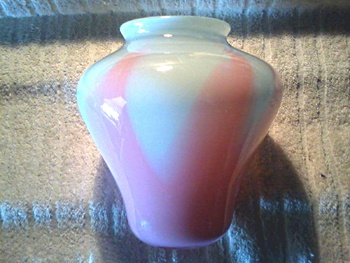 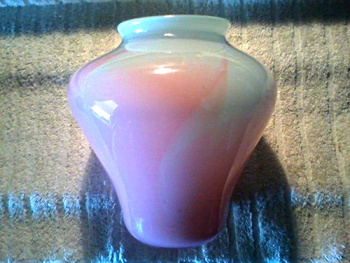 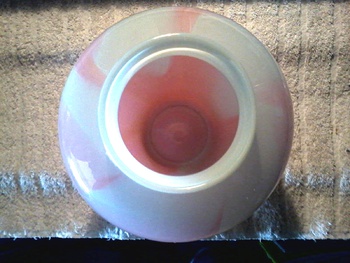 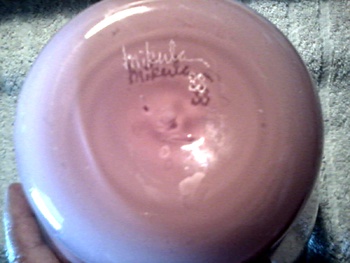 I did go back to the "West Lake Historical Society" yard sale today but I think they did most of their business yesterday. There wasn't much there that I hadn't seen already. So I wound up at GW's for the price sticker color change madness. I had been looking at this vase all week in the showcase. So I asked the cashier if I could take a look at it. I was mostly curious as to why it was priced so high . Ok it was signed on the bottom. So that's why,but it was also 50 % off today. Which made it affordable. Didn't recognize the artist. Time for a quick online search which yielded the info below. He's another local artist from the Cleveland area. This vase was from the early part of his career when he was a junior member of the Benchmark Glass Studio from 1988-94. It's 7 1/2 " tall and about 6 " in diameter. I love the shape and the soft mauve-pink colored swirls. The white portion looks a bit more blue grey than pure white. It is clearly signed on the bottom "Mikula " 88.
-Mike-

Born 1963 in Grand Junction Colorado and raised in Chautauqua County, New York, Michael earned a Bachelor of Fine Arts degree from the Cleveland Institute of Art in 1987. He has also studied at the Pilchuck Glass School in Washington, the Penland School of Crafts in North Carolina and the (now defunct) Fundacio Centre del Vidre in Barcelona, Spain.
From 1988 to 1996 Michael was a junior member of Benchmark Glass Studio, owned and operated by his mentors, former Professor Brent Kee Young and Mark Sudduth. In 1994, Michael completed a residency at the Creative Glass Center of America in Millville, New Jersey.
Michael exhibits in juried fine art and fine craft exhibitions throughout the United States, including the Smithsonian Craft Show and the Philadelphia Museum of Art Craft Show. In 2010 Michael exhibited with Pismo Fine Art Glass Gallery in Denver, Colorado. He is also represented by An American Craftsman Galleries in New York, NY.
Michael continues to live and work in Cleveland, Ohio where he has been a part of a studio cooperative since 1996. In 2009 he was awarded a $20,000 Creative Workforce Fellowship grant, generously funded by the people of Cuyahoga County, Ohio and administered by Community Partnership For Arts And Culture/Cuyahoga Arts and Culture.
Michael was awarded an Ohio Arts Council Individual Excellence Award for 2013.