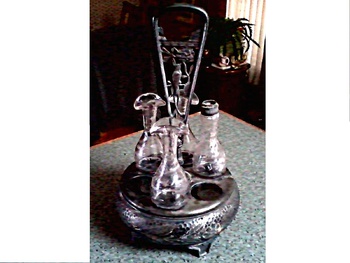 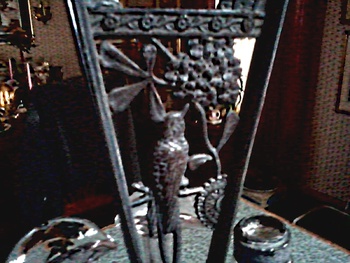 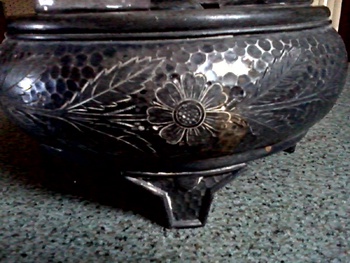 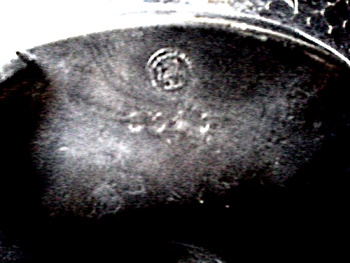 I looked at this yesterday at Volunteers of America and was intrigued but also disappointed that it was missing two cruets the stoppers and the silver cap to the shaker. It could use some cleaning and there's a spot of white enamel paint on the side. It was still there today so I decided to buy it. I love the stand. It's very "art nouveau". The handle has a Hummingbird surrounded by flowers. The bottom is incised with flowers and leaves. There's a tiny round stamp with a lion that says "Meridian Silver Plate Co. Quadruple Silver Plate and the numbers 3040. I didn't see one like it online although they seemed to have used the same cruets in different designs, so maybe I'll find the missing ones someday. I need the squat little sugar caster and the other salt or pepper shaker with it's top. There might be one or two tall finial type stoppers as well. The odd thing was, as I was carrying it around a lady stopped me and said "I see your buying the cruet set" I said "Yes but it's a shame it's missing pieces." She then told me she had found the cruets priced separately on the shelf and put them into the stand where they belonged. I told her "so that's why I saw prices on each one !" She told me "I bet if you come back tomorrow the other two will show up since the others were separated." Makes sense to me, I'll definitely keep checking ! -Mike"

Meridian Britannia Co.
Courtesy 1stdibs.com
The Meriden Britannia Company was formed in 1852 in Meriden, Connecticut. Meriden opened a store on Union Square in New York City in 1878. According to their catalog from that same year, the company won a first place medal at the 1876 Centennial Exhibition in Philadelphia, Pennsylvania for the "Large variety of silver plated white metal hollow ware, of excellent quality and finish, and of tasteful designs."
The English word cruet originates with the Old French crue meaning"earthen pot". However, some speculate that the early use of cruets was ecclesiastical, for example, Biblical use of a "cruse of oil," a jug or jar to hold liquid (I Kings 17:16). The culinary use of cruet sets were first introduced in the late 17th century by Cardinal Mazarin. The Cardinal always dined with a pair of salad cruets on his dining table at his home in France.