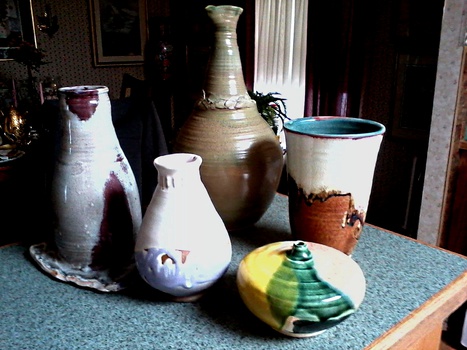 I thought it was time to put my Lois Van Vleet collection together for a group shot. All I know about her is that she is a southern Ohio potter. I found number five yesterday. It's the little yellow one. The first one I bought was the grey and brown piece on the slab. However it's not dated like the others but it is signed. I think it's probably the earliest one though. The rest are from 2001, 2003, 2004, and 2006. I can't really say which one is my favorite. The all have something unique about them. I love the large olive bottle with it's formed spout for it's design. The little lavender and white bottle reminds me of frosting on a cookie. It's just fun to pick up and hold. A very tactile piece. The large flared vase has a beautiful turquoise interior. I love the shape and multiple glazes on the yellow one. Then there's the one on the slab...well it's just funky. I call it the "cow" vase because of the brown spots...lol. Ohio is home to many of the great pottery companies so it's not unusual to find a lot of studio pieces. So when Lois's pieces turn up I always buy them. -Mike-