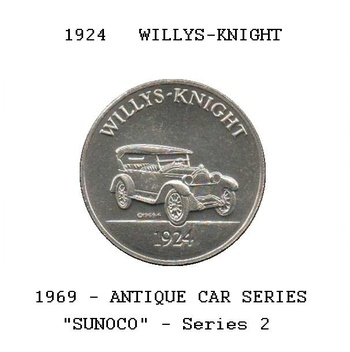 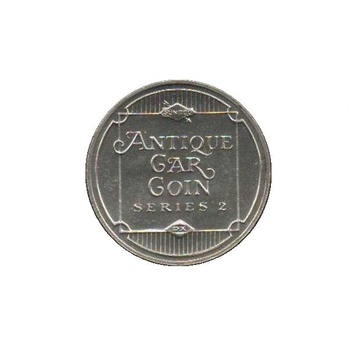 - 1969 "Antique Car Coin" aluminum token / Sunoco Company
- Minted by the Franklin Mint for the Sun Oil Co. / Series 2
- "1924 Willys~Knight" /26mm in diameter / uncirculated condition
- In 1969-70, Sunoco would give out these "Antique Car" tokens upon purchases made at their gas stations. - Also provided was a cardboard game board with cut-outs so these could be pressed into the corresponding slots.
*** Willys-Knight is an automobile that was produced between 1914 and 1933 by the Willys-Overland Company of Toledo, Ohio. The company had a production run average of 50,000 cars per year after 1922. Production ended in 1932 (model year 1933) when the company stopped building higher priced cars and instead focused on the manufacture of the inexpensive but durable Willys 77. The model range was continued until World War II, when civilian auto production discontinued in 1942, the car disappeared from the market.