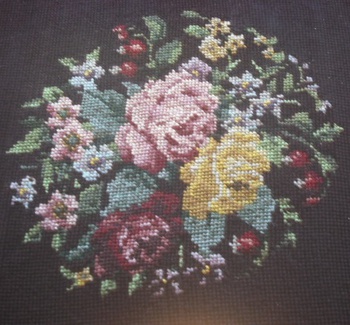 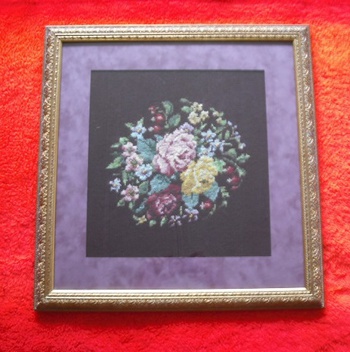 For Mother’s Day I thought I would share this multi-generational mother’s needlepoint, and the story of its travel across the Atlantic and then westward across the North American continent.

When my great-great grandmother immigrated to Canada from England, she brought her needlepoint along to occupy her through the long sea voyage. Unfortunately, she ran out of the background purple yarn, a bit short of the bottom of the piece. She tucked her needle in where she ran out and hoped someday to find a match for the yarn in Canada.

Her daughter, my great grandmother, brought this unfinished needlework out west with her as she and her husband made a life for themselves on their homestead on the Alberta prairie.

Her daughter, my grandmother, shocked the family by marrying an American from Montana. Eventually the needlework traveled south with her. Even then, my grandmother hoped to match that purple and complete her grandmother’s needlepoint and make a nice throw pillow.

Eventually my grandmother retired and moved in with her daughter, my mother, out here on the West Coast. The unfinished needlepoint was tucked into a drawer with other yardage and sewing things. Then one Christmas I struck upon the idea of having the needlework matted and framed as a gift. The top and sides are tucked around the backing to make the piece look square, and the unfinished portion, with great-great grandmother’s needle still tucked in where she put it, is just under the mat on the bottom.

My grandmother passed away a few years ago at the age of 99. The needlepoint now hangs in my 84 year old mother’s home, the great granddaughter of the one who began it.

Happy Mother’s day to all the CW moms out there!