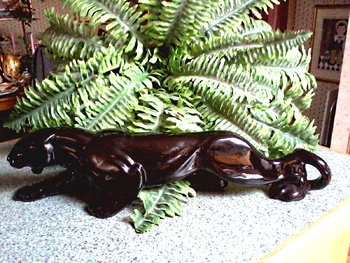 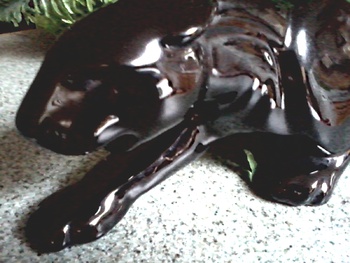 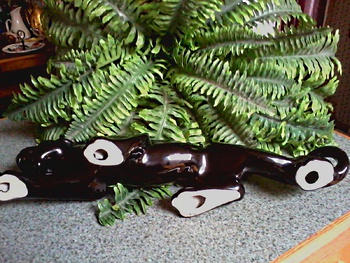 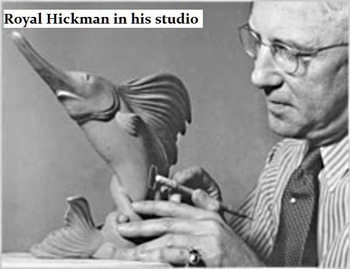 I picked this up at GW a couple of days ago and just got around to posting it. I actually set it aside and forgot about it. Kind of a good thing as it gives me something to post today. It's been slim pickings all week since my Murano paperweight finds on Monday.
I've always wanted one of these but had to pass them up either they were too expensive. damaged or gone by the time I decided to go back and pick it up. While I don't think this is an original 1941 Royal Hickman, it is Haeger and probably dates from the 80's or 90's as a reissue, but it could be from the 50's or 60's too. It's hard to tell without it's label. Early ones had a gold foil or paper label on the underside, while pieces from the 80's to the present have a Haeger bar code label with the year.
This figure was designed by Royal Hickman one of their best sculptures and was first introduced by Haeger in 1941. Hickman excelled at creating his pieces in the art deco style. The "stalk" was captured perfectly in his black panther. Haeger offered it in three sizes. This one is an 18" version and in perfect condition. There should be a black Haeger stamp on one of the front feet next to the hole. It had some cloth glued to each foot to protect the furniture. I removed it but the glue remains most likely covering the stamp. They can be very faint. poorly stamped and hard to read. There is also a large red bull (Toro) by Eric Olsen that is the epitome of mid-century style that I've been searching around for to add to my collection. That will most likely cost a fortune too if I ever come across one. -Mike-