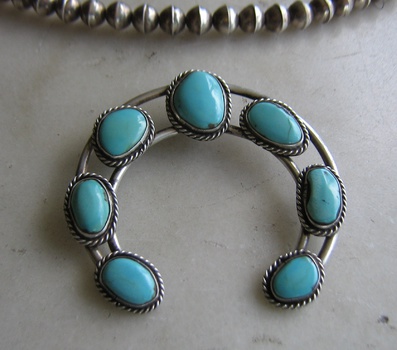 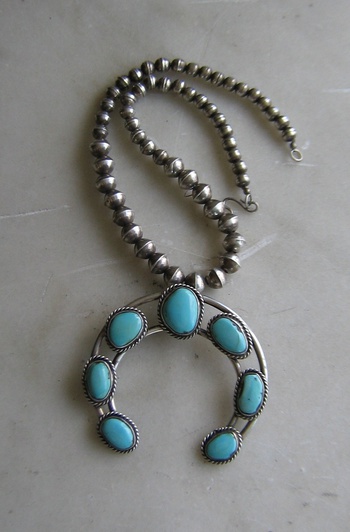 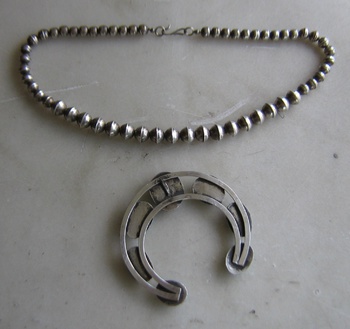 I found this amazing unmarked sterling & turquoise Horseshoe Naja for $8.00 in Monroe City, MO last weekend. It is 3"x3". Someone took it off a squash blossom necklace (in fact one is now on ebay bidding at $352. also unmarked)

The horseshoe or naja is "with probable Paleolithic origins, the inverted crescent form (called naja by the Navajo) has represented the Phoenician goddess of fertility, Astarte, and is mentioned in the Book of Judges among the ornaments on camels' necks. The Moors - who dominated Spain for eight centuries - adopted the crescent as a horse's bridle ornament, to protect the horse and rier from "the evil eye." The Spanish brought the idea to the Americas. The Navajo, whether directly from the Spanish, or indirectly through the Plains Indians, adopted the crescent form as a horse headstall (front center band of the bridle) and later as the crowning achievement of their squash-blossom necklaces. Altho the Navajo claim that the naja has no precise symbolic or spiritual significance, it is ubiquitous in their culture and held in high esteem."

A Naja of this size was most likely attached to a large man's squash blossom. In pic 2 I show it w/my handmade silver beads and then in #3 to show the unmarked back. It's so large that it makes the center 12mm beads look small.

This Naja still has the back loop so I might make it into a pin if I don't attach it to the beads.