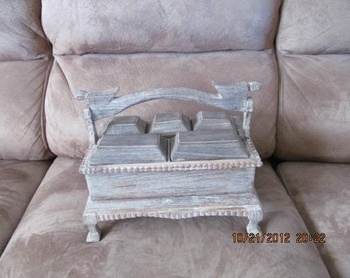 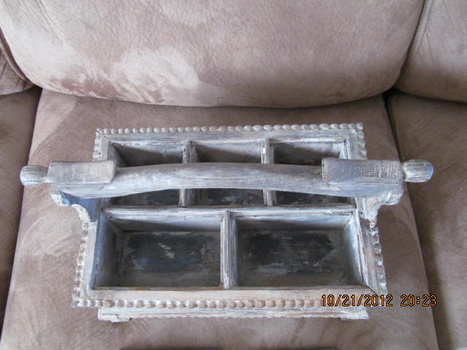 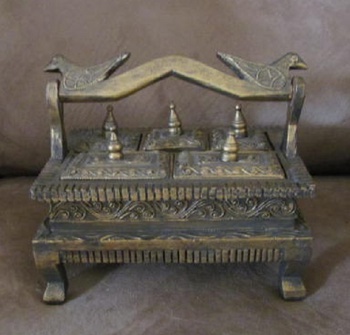 If I have put this in the wrong category, I apologize and want to know which category it belongs in.

I carefully removed the contents, mixed them all together and, in a state of depression and grief, said a prayer over them.

I then gathered up the remains, took them outside, dug a hole in my desert yard and buried them, saying a prayer that God would bless their souls and hoped that they were enjoying heaven.

I haven't touched the box since.

THEN....I found yet another box on Craigslist (pictured) that was frighteningly similar in design but, again, just had to have it so I met with the lady who was selling it and bought it from her for $10. It's smaller; 7-3/4" wide x 5-1/2" deep x 7" high.

We visited with each other for a few minutes and I told her about the larger box I had bought previously and repeated the story I told here.

You can imagine my shock and dismay when the lady burst out laughing and couldn't stop. She had to take breaths in betwen her outbursts of hilarity. Standing there with a puzzled, painful look on my face I asked her why the story was so funny.

She finally gained her composure long enough to ensure me that the substance inside the grey box was NOT human remains. I asked her how she knew this. She then, as calmly as she could, explained that those contents were probably old SPICES and said her box was used by her mother as a spice box. She went on to say some people use them as jewelry boxes or for storing any number of things but they were certainly NOT urns.

Well, it was then that "I" burst out laughing and was mortified to know that I went to all that trouble mourning the loss of a family of 5 spices.

My question is; are these boxes really spice boxes?