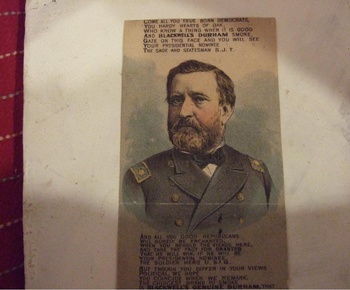 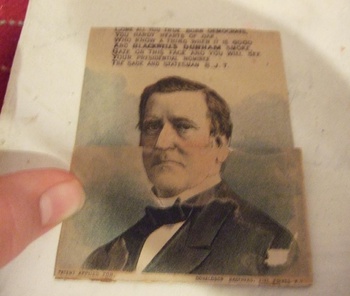 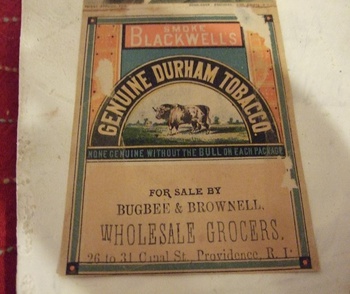 This beautiful advertising piece was found in a barn under a bunch of old newspapers, just kidding. I found this trade card at a antique mall in mason michigan, in a presidential booth (no pun intended). I took it out of the frame and discovered it was it was a metamorphical trade card. Flip it closed, it shows Samuel Tilden, a libral running for the democratic nomination in 1880. And flip it open, shows ulysees S. Grant, running for the Republican nomniation. This kinda reminds me of a 1907 coca- cola trade card. It also appears to be trimmed. There are poems for each of the people...

Samuel Tilden-
COME ALL YOU TRUE BORN DEMOCRATS,
YOU HARDY HEARTS OF OAK,
WHO KNOW A THING WHEN IT IS GOOD
AND BLACKWELL'S DURHAM SMOKE,
GAZE AT THIS FACE AND YOU WILL SEE
YOUR PRESIDENTIAL NOMINEE
THE SAGE AND STATESMAN S. J. T.

Ulysees Grant-
AND ALL YOU GOOD REPUBLICANS,
WILL SURELY BE ENCHANTED,
WHEN YOU BEHOLD THE VISTAGE HERE,
AND TAKE THE FACT FOR GRANTED
THAT HE WILL WIN, IF HE WILL BE
YOUR PRESIDENTIAL NOMINEE
THE SOLDIER HERO U.S.G.

BUT THOUGH YOU DIFFER IN YOUR VIEWS
POLITICAL WE HOPE
YOU CONCIDE WHEN WE REMARK
THE CHOICEST BRAND TO SMOKE
IS BLACKWELL'S GENUINE DURHAM, THAT
SUITS EVERY TASTE NO MATTER WHAT
REPUBLICAN OR DEMOCRAT

The colorful advertising is on the back.