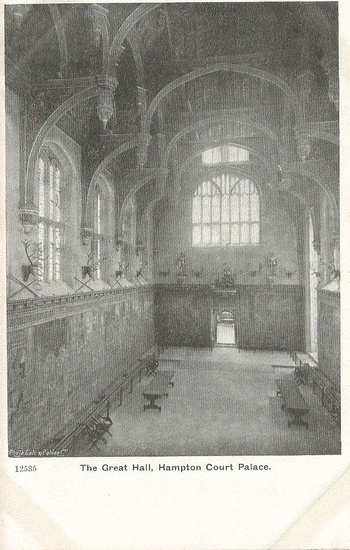 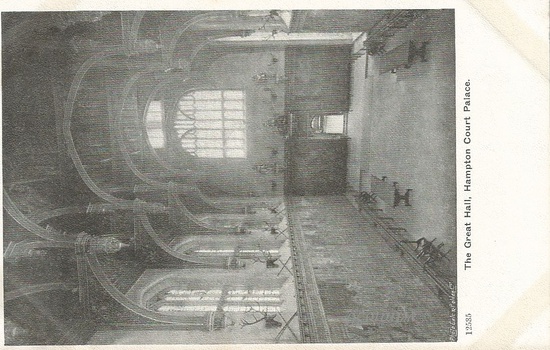 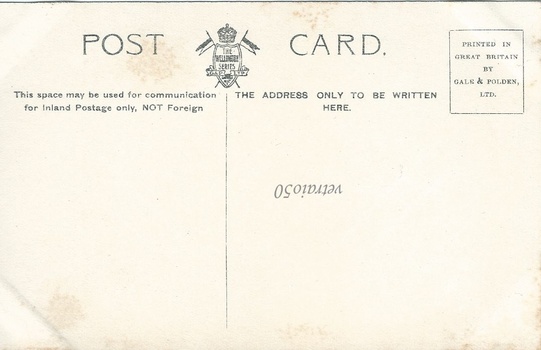 This card is the only internal shot that the Millers bought while on their visit to Hampton Court in 1906. It is Card No. 12535 from the Wellington Series published by Gale and Polden Ltd., London, Aldershot and Portsmouth.

The card is a bit out of order too, I suppose.

In order to get to this area of the Palace you need to return to Anne Boleyn's Gateway and take the stairs up to the Great Hall. This particular shot of the room was probably taken in the Minstrel's Gallery. This is described by many as being the finest example of a Tudor Hall.

In a guide book written a few years after the Millers visit Walter Jerrold describes the scene like this:

The tapestried walls, the high windows, and the fine Perpendicular hammer-beam roof together form a magnificent and pleasing whole, one of the noblest halls of its period that the country has to show. The tapestries, in which are depicted incidents in the life of Abraham—though time has dimmed somewhat the splendour of their colouring—are yet remarkable links with Tudor times, for they were purchased by Henry the Eighth and have remained at Hampton Court ever since the period of their acquisition.

Though much restoration was done in the middle of last century the general character of the whole was not interfered with. Then it was that the stained glass was put in—to replace that which had presumably been destroyed during the times “when civil dudgeon first grew high and men fell out they knew not why”—and we may well be grateful that the taste displayed in doing so was on the whole so well displayed, though the garish blue of the western window above the Minstrels’ Gallery is perhaps an exception to that taste.

The great oriel window at the southern end of the dais, with the beautiful groining above cannot fail to attract attention, and looking back from the dais down the Hall we may notice the elaboration and richness of the magnificent roof, which is acknowledged to be probably the most splendid roof of the kind ever erected in England.

Though we see the Hall to-day with but a few sightseers in it, it needs no great effort of imagination to repeople it with figures of the past; to recall the time when it was a centre of Tudor revellings, or when King James sat in his chair by the great oriel or Bay Window and saw the “goddesses” descend from the “heaven” above the Minstrels’ Gallery to carry on their masquings below. At the farther end of the dais is a door, now covered over, leading to the antechamber known as the Horn Room."