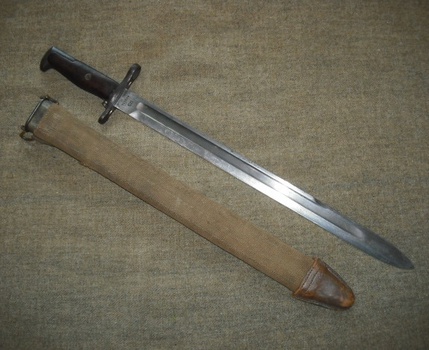 The first bayonet for the 1903 Springfield was a metal rod that fit under the barrel in the manner of a cleaning rod that could be slid out and locked into position, producing a ten inch spike. It was not popular, and observing the increased use of the bayonet in the trenches during the Russo-Japanese War, President Teddy Roosevelt had Secretary of War Howard Taft convene a board to create a new bayonet.

The resulting Model 1905 bayonet has an impressive 16 inch blade. Once again I can’t help but observe that as new shorter rifles were adopted at the turn of the century, bayonet blades tended to lengthen to make up for the perceived lack of “reach”. The blade is polished bright, which was the practice until 1917, when the Army decided that a less reflective blued blade was a better option in the trenches than a shiny one.

My bayonet is marked on one side with “SA” for Springfield Armory, the official Ordinance Bomb cartuche and the 1911 year of manufacture. On the other side is “US” and a serial number. Coincidentally, this bayonet was manufactured the same year as my rifle.

The scabbard is the model 1910, which replaced an earlier leather scabbard. This scabbard has a wood body wrapped in rawhide covered with a canvas sheath that could be removed for cleaning. The brass wire hooks behind the mouth of the scabbard attach to eyelets on the equipment belt.