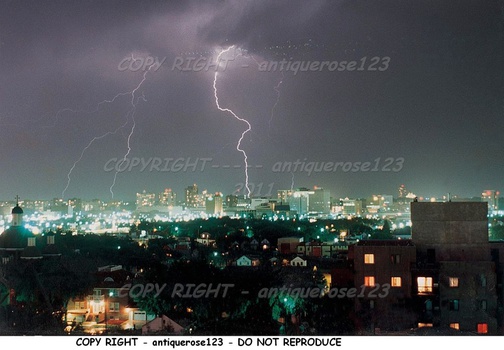 This pic I took way back in 1980's using a PENTAX K-1000 SLR 35mm Camera by Me. I took a whole roll of film taking pics of Lighting while using a *metal* tripod and a cable release button for my camera. This was the best Pics of the Roll since you never knew where the lighting was going to be. I was in my 20's and was determined to get a lighting shot. Was at a friend's place rooftop patio doing this. The Location is Saskatoon, Saskatchewan Canada. I won a few awards over the years with this Photo and it was also used on the City Bus Passes back in the year of "The Living Skies" contest.

Moral of the story:
Do what you can to get a good shot -- but using a METAL TRIPOD during a lighting storm is not one of them.