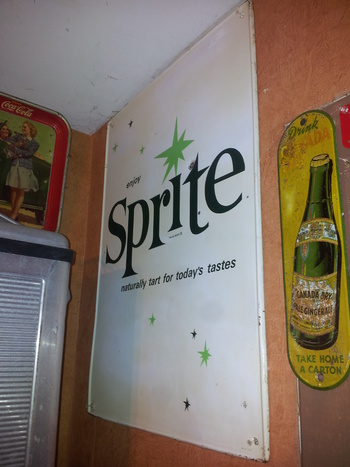 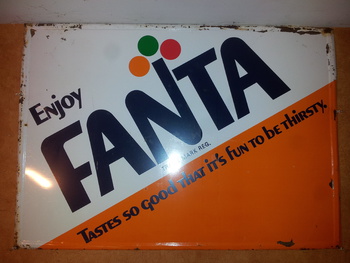 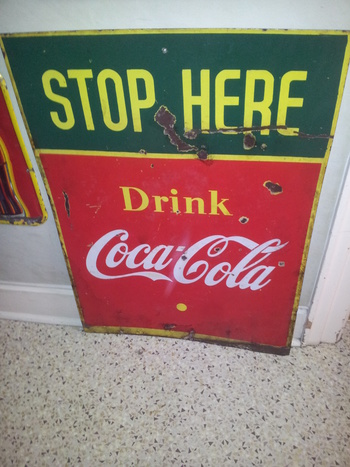 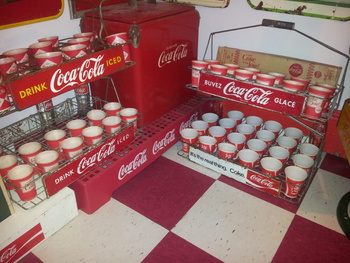 In my opinion all the signs shown were licensed under the Coca-Cola company. I know they may not say Coca-Cola directly on the sign, but pretty sure Coca-Cola has the rights to all these companies atleast in Canada for sales of that product.

Sprite, Fanta, and even Canada Dry are all sold as Coca-Cola products in Canada. The only vending machines, or coolers you see in Canada now in days are Coca-Cola, and "P" machines. Not sure if thats how those products are sold in the US, but as long as I have been alive these products have always been sold under Coca-Cola.

Picture one shows 1965 Sprite sidewalk sign in excellent condition. Pretty sure Sprite is hard company to find signs for, they came out in the 1960s? I think this might have been one of the early signs for Sprite. Also seen in picture one is a 1959 Canada Dry palm push. Pretty rough condition, but hard push to find, so enjoying it as is until I can find a better.

Picture two 1970 Fanta sign, on the back side of the sign its stamped property of Coca-Cola ltd. I still gotta clean this sign, I think it will clean up bit better, just been really busy lately. Fanta signs bring big money in my area, not really sure why (not much of a fan myself lol), I guess Coca-Cola solution to Orange Crush worked?

Picture 3 double sided porcelain coca cola side walk sign. I had one of these in the past but was pretty rough so ended up trading it. I saw this sign sunday priced pretty low, so I took her room. Hard to find Canadian WW2 sign (dated 1941), Coca-Cola stopped production of this sign due to war materials needed. This was the only Canadian porcelain sidewalk sign Coke made. I gotta find the stand for mine, if any one sees one let me know please and thanks.

Pic 4 I got another stadium carrier!!! lol hard to tell which one cause I got soo many now, but managed to make a trade with CCkid for the 1960's French carrier. Hard to put a price on the French version when the english version is not worth much. I figure since I really wanted the French version to have with my english it was worth paying as much as the english one is worth.