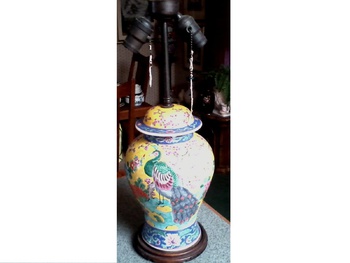 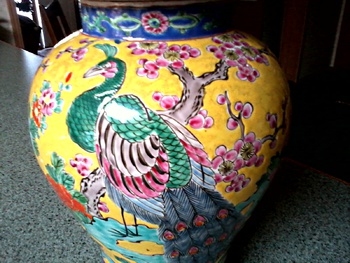 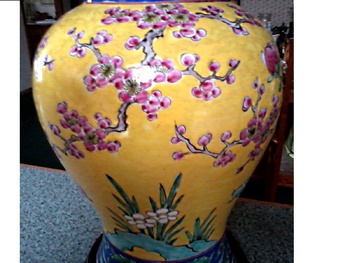 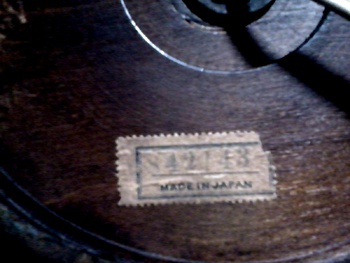 Didn't take very long this morning to find something nice. First stop Salvation Army and this beautiful 20" lamp. It was being sold "as is" because someone had tried to repair the ancient electrical wiring. It really needs a bit of TLC. I was curious whether it started life as a vase or was originally designed to be a lamp, so I took it apart. I was actually relieved to find it was designed to be a lamp and not an expensive vase that had been drilled. The holes in the lid and base are glazed so they were made before it was fired. There are no marks on the ceramic, but the wooden base has a stamp type label that says made in Japan with the numbers 42143. I don't know if that means the whole lamp or just the base. The peacock and cherry blossoms are a Japanese design elements but the piece looks Chinese to me or at least imitating the Chinese style . There is a hairline crack that runs down from the top and the ceramic is a bit denser than most porcelain . The crack probably came from over tightening the base, but it's not that obvious. It's missing it's top cap to cover the sockets electrical wiring and the finial. Also, one of the sockets pull chains is not working.There are the remains of what were probably silk tassles on the end of the chains. I'm not sure what kind of shade it had. I'd say most likely silk as well. The round wooden base it also cracked and they glued 3 little blocks of Masonite to repair it at some point so it would still stand up. Like I say it needs some TLC and I'll post some follow ups once it's finished. -Mike-