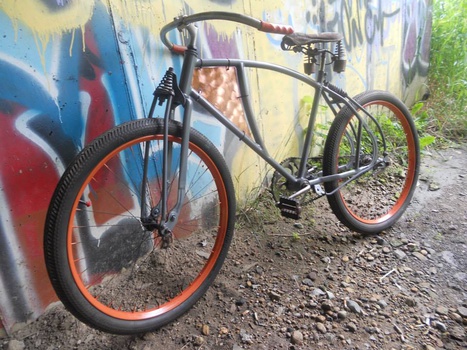 This is the bike that started my collecting craze....I mean enjoyment! Now with over 60 vintage riders I think it is time for professional intervention...at least that is what my wife thinks. Right now we have them in several locations but room is running out! This started as a frame I purchased at an auction for $4.00. After researching it I finally found out that it is a rare Huffman-Dayton twin-flex frame that was only made in late 1939 or early 1940. Many suspect that is from early 1940 due to unusual cross-bar. The straight bar was standard...this one may have been an attempt to re-invent the bike itself. This bike was also referred to as the "Death-cycle" due to so many accidents after it was released. It was totally abandoned a year after production started due to suppliers pulling out due to possible lawsuits and accountability. I finally located period correct parts to complete the vintage café-styled bike. It could be totally restored correctly if desired. The frame was originally red (after close scrutiny) but was rusted pretty good and had only about 1% original paint. I used a color similar to early Harley-Davidson Gray and it came out nice with the overall build.