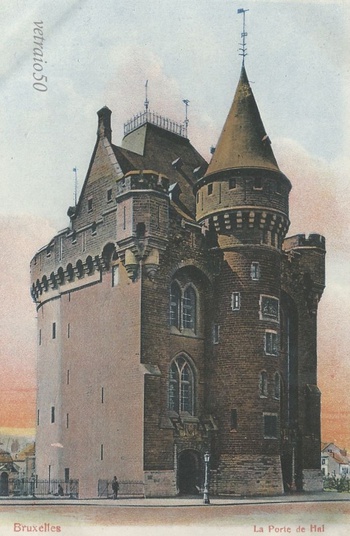 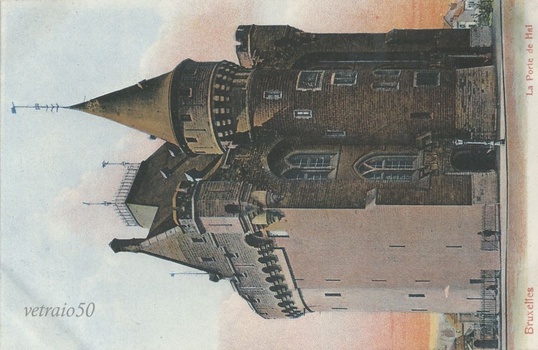 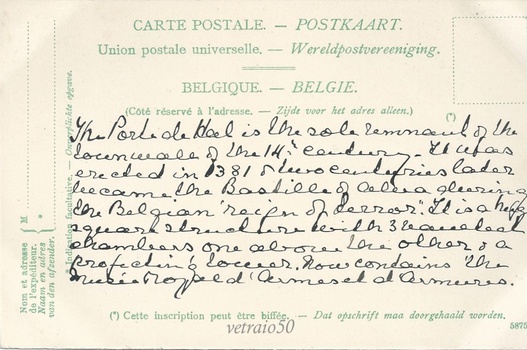 One of my favourite postcards from the Septimus and Clara Miller Collection is this beautiful card of La Porte de Hal. On the reverse is some handwritten text on the topic of the Halle Gate (Porte de Hal - Hallepoort). I find the writing style a bit difficult to read but I was able to transcribe a few words and to my surprise I was finally able to get it all down. I believe it is in the hand of either Clara or Septimus. They loved neo-Gothic!

The text reads: “The Porte de Hal is the sole remnant of the town walls of the 14th century. It was erected in 1381 and two centuries later became the Bastille of Alva during the Belgian ‘reign of Terror’. It is a huge square structure with three vaulted chambers one above the other & a protecting tower. Now contains the Musée Royale d’Armes et Armures.”

All quite informative and was used as an 'aide-memoire' I suppose by the Millers. Most of the cards collected do not have any text added to them, but there are a few. I wondered where the text came from because I knew that they used tourist guides for their trip planning in England. So I put this text into google and 'bingo'!

The text is taken from 'Belgium and Holland Including the Grand-Duchy of Luxembourg, Handbook for Travellers' by Baedeker, Karl. pp. 118-9. (Originally published in 1905) Even the dates coincide with the 1906 visit; they were a using a 'modern' tourist guide!

There are some other cards that have portions from this same guide that I will post in the coming week or so.

But imagine what the walled city of Brussels must have looked like in 1381 when the Halle Gate was built! It is the only remaining gate of the walls built at that time. There were six gates like this one!

The walls have disappeared and the fosse or ditch for the moat has been filled in. The old gateway now stands in an open space, a solitary relic of the middle ages. The original gate included a portcullis and drawbridge over the moat. The structures that housed these are still visible.

The gate is at the southern edge of the inner town and faces the city of Halle (French: Hal) in Flemish Brabant which it faces: the Gate to Halle.

The reason why this gate survives is put down to fact that it was used later as a prison. It was used as a 'Bastille' or Stronghold by the fearsome Duke of Alva during the tyrannical reign of Philip II. It was at other times used as a customs house, for grain storage, and a Lutheran church.

In the nineteenth century the first king of the Belgians Leopold I began a huge building programme in Brussels and this Gate was preserved and remodelled. It had a new function: it became one of the first museums in Europe.

Karl Baedeker writes in his guide cited above: "On the first floor are weapons of every description and suits of armour; a richly ornamented helmet is said to have belonged to Charles V.; the stuffed horses are those ridden in 1596 by the Governor Archduke Albert of Austria and his consort Isabella on the occasion of their public entry into Brussels; in the window-recess, artillery implements found in a well at the castle of Bouvigne , into which they had been thrown, together with the defenders of the stronghold, by the French in 1554."

"The architect Henri Beyaert restored the building between 1868 and 1870, changing the austere medieval tower with more romantic Neo Gothic embellishments. The outer entrance, now facing Saint-Gilles, is closer to the original appearance. In front of the inner gate, facing the city of Brussels, Beyaert added a circular tower topped by a conical roof, containing a monumental spiral staircase. Beyaert also added turrets and a large roof." - http://en.wikipedia.org/wiki/Halle_Gate

"An artists studio founded by Hermann Guggenheim that published many finely printed postcards in lithography and collotype in addition to other lithographic products. While they produced images of types and artist signed cards from such notables as Wilheim Wachtel, the vast majority of their large output was in view-cards. When Herman died in 1896 the firm passed to his two brothers Marcus and Emil. After World War One they began publishing real photo cards in addition to their printed work."
(http://www.metropostcard.com/publishersg.html)