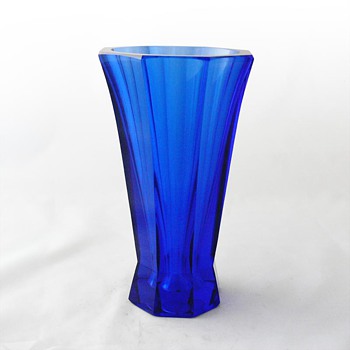 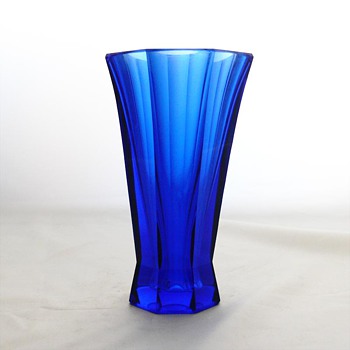 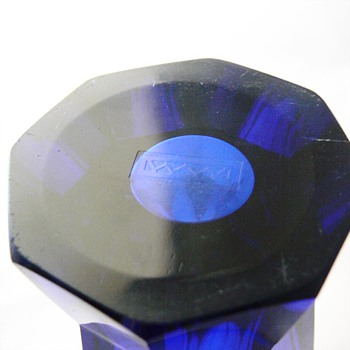 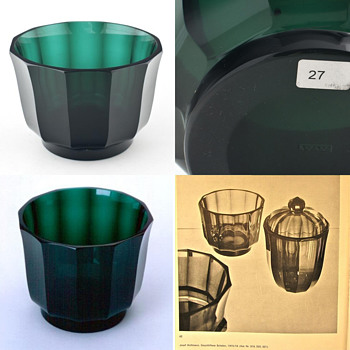 You already know this cobalt blue vase as it was included on a previous post where I asked for help about several unknown vases (http://www.collectorsweekly.com/stories/118661-four-unknown-ca-1900-glass-vases-help?in=collection-143 ).

About this one I wrote “No.4 reminds a lot of the Josef Hoffmann's vases for Moser, but sadly isn't one of them. Does anyone recognize the WW logo at the base?” Carlos got it about two years ago and believed it would be one of Hoffmann’s designs but the WW logo didn’t seem to be from the Wienwer Werkstätte nor Moser so that vase was thought to be one more of the many copies lesser glass companies made at the time Moser produced Hoffmann’s vases.

This week we received a message from Katzl telling us about a green bowl seen at the Europeana website that was identified as designed by Hoffmann and had the same WW signature on our cobalt blue vase. This green bowl was immediately identified by Carlos as a well known Hoffmann design –I am sharing with you a period picture of it- so high chances are our blue vase will end up being a Josef Hoffmann design, just like the bowl at the Europeana website (which by the way is housed at the Museo Nacional de Artes Decorativas in Madrid, about 2,4 km away from our own place!).

As for the factory that made it, it could have been made by Moser or by other glass factories that also worked for the Wiener Werkstätte. That still remains a mistery.

At the Wiener Werkstätte photographic archives kept at the MAK in Vienna they have an entry for the very green bowl Katzl told us about (and you can see on pic. 4). It positively is a design by Josef Hoffmann, and according to them, this design could have been done by these factories:
- Meyr's Neffe (Adolf bei Winterberg)
- Johan Oertel & Co. ( Haida)

(and one of them marked it with the mistery WW stamp)