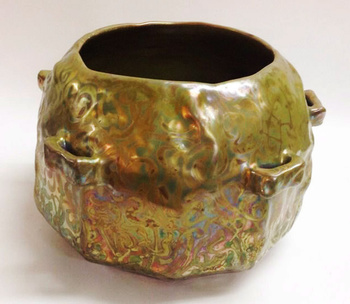 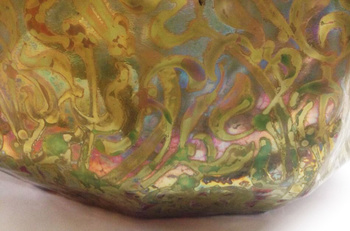 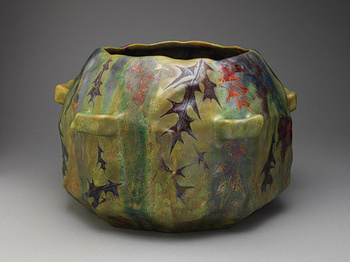 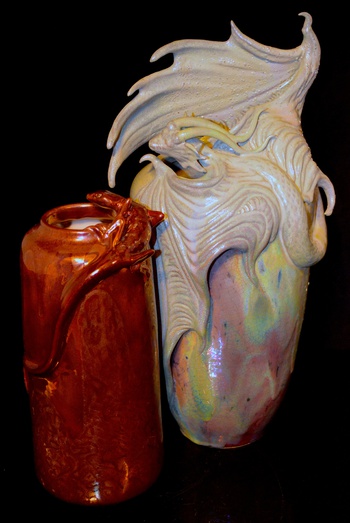 The third image depicts Its mate at the Met. and the forth photo are mine.
Description from The Met Museum...
French ceramist Clément Massier first explored the aesthetic potential of metallic luster glazes in 1887, when he began collaborating with Lucien Lévy-Dhurmer. Lévy-Dhurmer was a collector of Hispano-Moresque ceramics decorated with iridescent glazes derived from metals such as copper, gold, and silver. The influence of the Spanish earthenware, with its bright, reflective metallic glazes, is evident in the objects he produced in Massier's studio during the nine years he was employed there, and Massier continued to explore the effects of luster glazes long after Lévy-Dhurmer's departure in 1896.
To create the scattered copper-red oak leaves silhouetted against the mottled green and beige ground of this jardinière, Lévy-Dhurmer achieved a range of iridescent colors that give the surface a sense of depth not possible with more conventional glazes. The natural, organic quality of both the richly patterned luster glaze and the irregular shape, which resembles a large gourd, marks this highly original piece as a superb example of Art Nouveau ceramics.