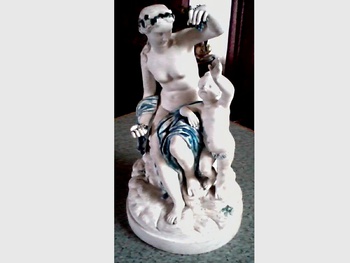 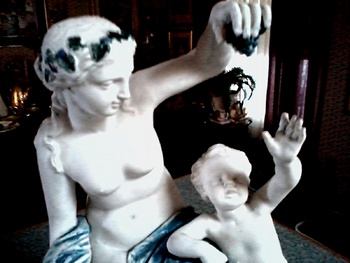 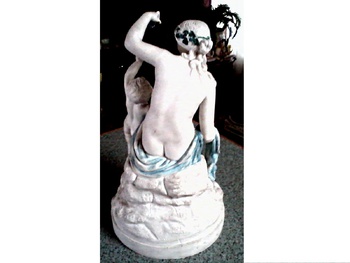 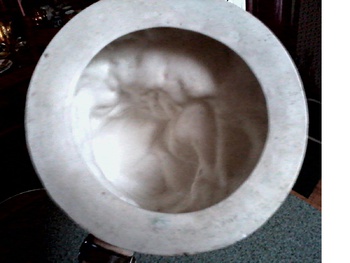 Hadn't been to Volunteers of America in a couple days and they had gotten in a few figurines. The others looked kind of cheap. Alabastrite badly molded and such. This one however seemed a bit nicer and had better modeling. It's 13" tall and the base is 7" in diameter. The blue accents on the drapery and flowers kind of put me off. Was this how it was suppose to be or did someone paint it ? There are no marks of any kind. Not even sure how old it is. I looked online at Parian figures which are made to simulate marble. The bottom and interior seem to be right. Parian is a liquid and poured into a mold so the pieces are mostly hollow inside. It's really quite dirty despite the pictures. I'm not sure how to clean it especially the base. I kind of have mixed feelings about it but I'm not sorry I bought it.
-Mike-

Parian Ware
Courtesy of Wikipedia
Parian is a type of bisque porcelain. It was named after Paros, a Greek island renowned for its fine-textured, white marble of the same name. Invented by Thomas Battam, Parian was essentially designed as imitation carved marble, with the great advantage that it was prepared in a liquid form and cast in a mould, enabling mass production.
Parian ware was utilised mainly for busts and figurines, and occasionally for dishes and small vases, such as might be carved from marble. Several English factories claimed credit for its development. The Staffordshire firm run by William Taylor Copeland and Thomas Garrett first produced and marketed it in 1842. In 1845, as part of a concerted effort to raise public taste and improve manufactures, the Art Union of London commissioned Copeland to make a series of figures after works by leading contemporary sculptors. Mintons and Wedgwood produced similar wares, also known as "statuary porcelain", other manufacturers included Goss, Royal Worcester, Robinson and Leadbeater. It was initially used for relatively high quality work but later was produced by a great number of manufacturers and considerably lost its cachet. Parian is still being made by Belleek Pottery.