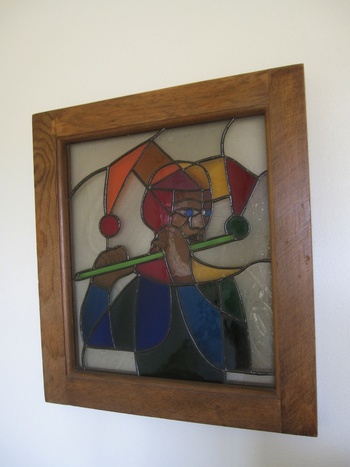 My Great Uncle created this piece many years ago and it still hangs in my mothers home.

Ah, Uncle Frank! He was such a wonderful man with a very kind soul. He was a joy to be around. When I was very young, he taught me to paint with cut potatoes and Popsicle sticks :) I loved going to his home he shared with my Aunt Janet. Aside from the artwork they did together, they took care of my Great Grandmother until she passed at the age of 98.

My Uncle was a "gunner" in WWII and while flying in the plane, took many photographs. I believe that his brother is the keeper of most of those. One particular photo I remember was of his best friends plane that was actually shot down, I also remember him telling me that he did not send that photo to his friends family, with much pain in his kind heart.

After the war, he applied for work as a commercial artist where my great aunt was the secretary. Love at first sight, they were soon married. He designed the Kamchatka Vodka billboards you would see along the freeways. Years later he went on his own to design many beautiful pieces of art and I can't wait to share the pieces I have.

He may have not reached "fame" in the world of artists, but without doubt, he was famous to me!