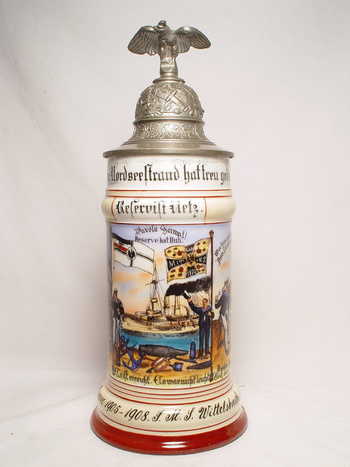 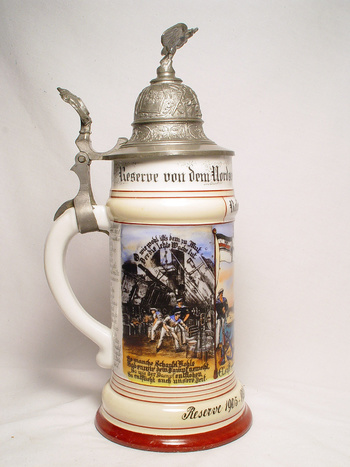 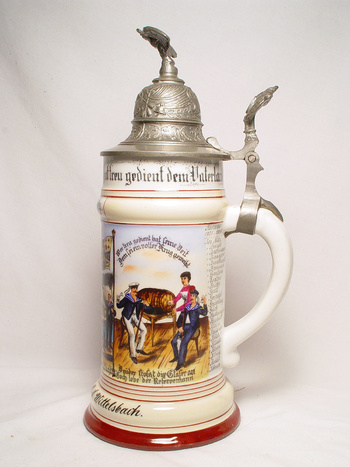 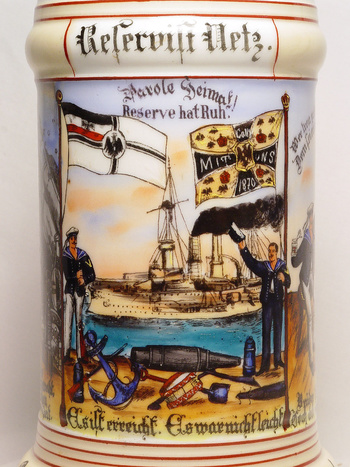 Imperial German reservist’s stein of Seaman Netz. Matrosen (Seaman) Netz served on the SMS Wittelsbach from 1905-1908. The finial of the stein is a crowned Prussian eagle with outstretched wings. The left side scene shows stokers manning the ship’s boilers. The center scene shows two Matrosen holding German Naval Flags with the Wittelsbach depicted in the central motif. The right scene shows two sailors in a gasthaus holding their steins and apparently smoking reservist’s pipes as a barmaid fills another stein with beer. The lithophane is clear with no spidering showing a reservist saying goodbye to his "lady love". The roster is sharp and legible. Around the upper rim of the stein in German is “The Reserve of the North Sea has faithfully served the Fatherland”.
Wittelsbach’s keel was laid down in 1899 and she was launched in October 1902, at the cost of 22,740,000 marks. Wittelsbach was the first capital ship built under the Navy Law of 1898, brought about by Admiral Alfred von Tirpitz. By 1905 larger heavier armed " Dreadnaughts" were being built which relegated the Wittelsbach to a support role. The ship served in the I Squadron of the German fleet for the majority of her career, a total of less than eight years before being decommissioned on 20 September 1910. After the start of World War I in August 1914, Wittelsbach was brought back to active duty in the IV Battle Squadron. The ship saw limited duty in the Baltic Sea against Russian forces, though the threat from British submarines forced the ship to withdraw by 1916. The Wittelsbach then saw service in a number of auxiliary roles, ultimately as a tender for minesweepers after 1919. In July 1921, however, the ship was sold and broken up for scrap metal.
The captain of the Wittelsbach at the time of Netz’s service was Maximilian Reichsgraf von Spee who was promoted to captain and took command of the battleship SMS Wittelsbach in 1905. Three years later, he was made chief of staff for forces in the North Sea. Elevated to rear admiral on January 27, 1910, von Spee saw service with the Scouting Forces of the High Seas Fleet. Viewed as a rising star, he was promoted in 1912 and given command of the prestigious German East Asia Squadron. 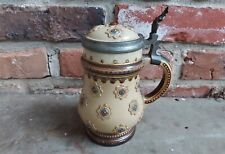 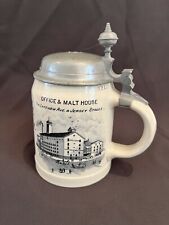 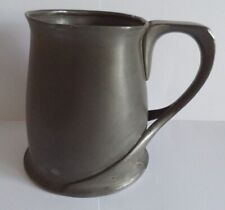 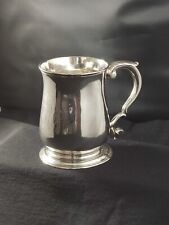