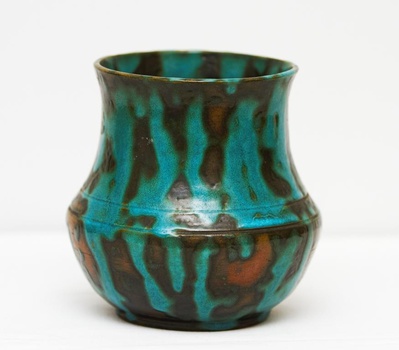 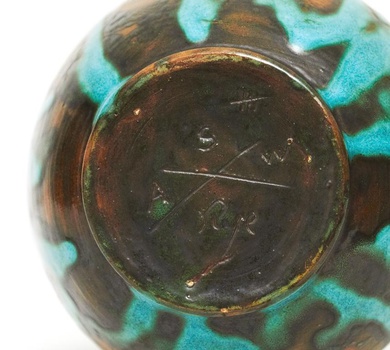 Dark brown Rye vase with turquoise stripes in a ‘jazzy’ art deco style. Rye is located in Sussex county in southern England and the area was a pottery centre from an early period (12th century) - a number of small potteries were located there, producing pottery for daily use: pots, vases, jugs etc. Rye Pottery was originally founded around 1800 in Cadborough, but incorporated into Belleview (or Bellevue) Pottery in 1890. Around this period and onwards the pottery produced what is normally associated with Rye pottery - the so-called Hop ware: dark brown vases and bowls etc. decorated with green hops and leaves in high relief. In the 20th century the pottery changed its name several times and was finally renamed 'Rye Pottery' after WWII. The pottery is still in operation. Here’s an article with more details about the history of the Pottery: http://www.ryemuseum.co.uk/rye-pottery-nearly-250-years-of-collectability/