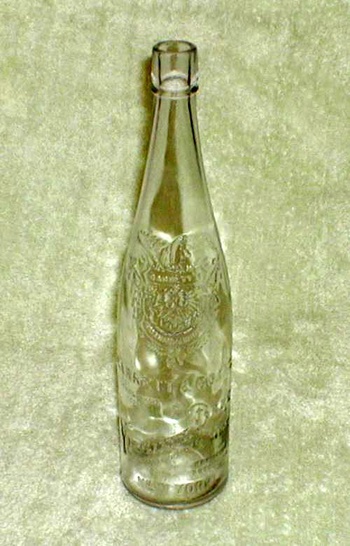 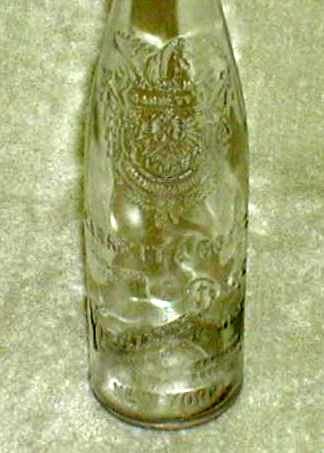 This is a circa 1910's-1920's Garrett's "Virginia Dare" Wine Bottle.
Machine made, mold lines up both sides from bottom to top lip, heavily embossed with the Garrett's American Wines eagle-over-shield emblem, Garrett & Co., Inc., Virginia Dare Wine, established 1835, refilling prohibited, and New York at the bottom / Contents 4/5 quart
- bottle is 13" tall - later examples had a crown cap bead lip (1920's-1930's, up to and after prohibition) and the 1940's-1950's had the external threads for a screw-on cap and also featured paper labels. The company was purchased in 1965 by Constellation Brands.
-- Virginia Dare, originally known as Garrett & Company, was started in 1835 as a winery in North Carolina. They also had several other brands, but Virginia Dare would prove to be the most popular. The wines produced were vinified from the Scuppernong grape. The Scuppernong grape is a Native American white wine variety and one of the first grapes used in making wine by early colonist. The name derives from Virginia Dare (born 1587, date of death unknown) who was the first child born in the Americas to English parents. She was born into the short-lived Roanoke Colony in what is now North Carolina, which we all know from history, literally disappeared without a trace.